The hard work and achievements of the Armed Forces and those who support them has been recognised at The Sun Military Awards (The Millies).

Now in their eighth year, the awards were hosted by ITV News at Ten presenter Tom Bradbury at the historic Guildhall in London.

He was joined by celebrities from the worlds of sport, entertainment and politics including Henry Cavill, Sir Ranulph Fiennes, Susanna Reid, Boris Johnson, Jeremy Clarkson, Rod Stewart and Penny Lancaster.

This year’s Millies honoured the accomplishments and professionalism of our servicemen and women, as well as members of the public who in a variety of ways work tirelessly to support our Service personnel.


The Judging Panel made two further awards for special recognition. The first honoured the achievements of the Royal Navy and Royal Air Force Search and Rescue teams, which recently handed operations over to the Maritime and Coastguard Agency and Bristow Helicopters. The Invictus Games Foundation was also recognised.


2015 was a year in which servicemen and women were active on duty both at home and abroad covering over 20 operations in 19 countries, working hard to support and assist those in need. Now in its eighth year, the Millies provides a unique opportunity for the British public to honour our Forces for all they have done on our behalf, each year.

2016 will be no less challenging, not least as we implement the decisions made in the recent Defence and Security Review and continue to deploy Defence assets overseas on operations including Syria. As our Armed Forces face those challenges, the courage, professionalism and teamwork of those honoured today will remain a constant inspiration. I hope you will join me in recognising their remarkable commitment and service.
​
Man of Steel actor Henry Cavill, who plays Superman on the silver screen, presented the award for Best Reservist to Royal Marines Reservist Major Henry Dowlen, Major Dowlen was recognised for his work in Sierra Leone as part of efforts to stop the spread of Ebola. Henry Cavill, whose brother serves in the Royal Marines, said:


It means a lot to have been able to present this award. Any opportunity I have to show respect to members of the Armed Forces who have done wonderful things is an opportunity I would jump at – especially an opportunity to to give an award to a member of the Royal Marines Reserves, as my brother is a Royal Marine.

The stories I have heard today have been fantastic and inspiring tales, I feel proud of all of them.
​
Major Dowlen added:


It was humbling to have been recognised in this way. It was also a pleasure to receive my award from Henry Cavill. His brother and I used to work together so it was nice to finally meet him.
​ 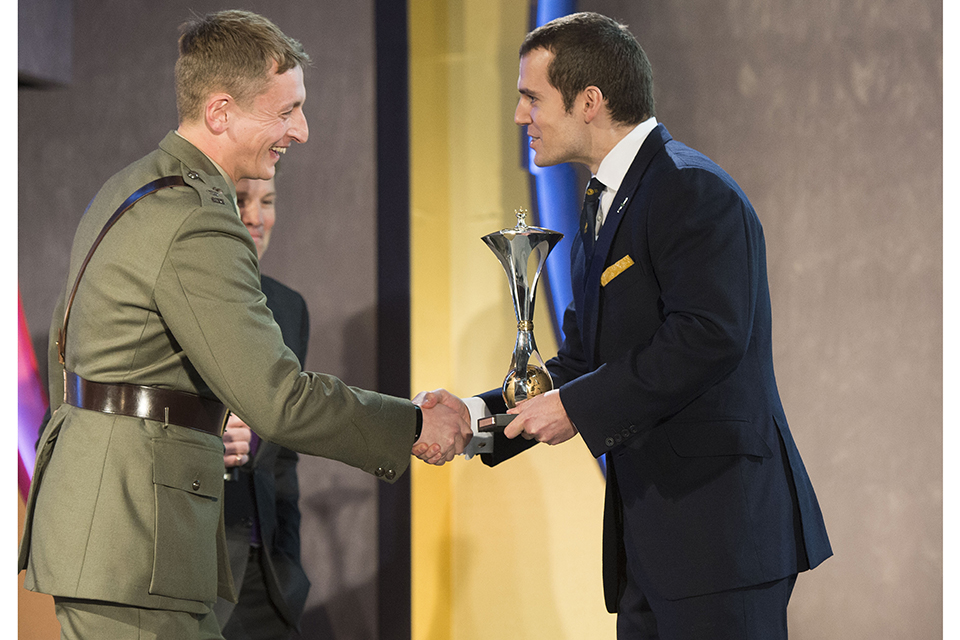 The Best Unit award went to HMS Bulwark as a tribute to the huge variety of operations they deployed on last year- from commemorating the anniversary of Gallipoli to the rescue of migrants in the Mediterranean. Captain Nick Cooke-Priest, the commanding officer of HMS Bulwark, said:


I feel huge pride in receiving this award for two reasons. Firstly, we executed the task we were set and this was absolutely a reflection of those involved.

And secondly, because we felt we were doing something good. There is no greater privilege than saving someone’s life.
​ 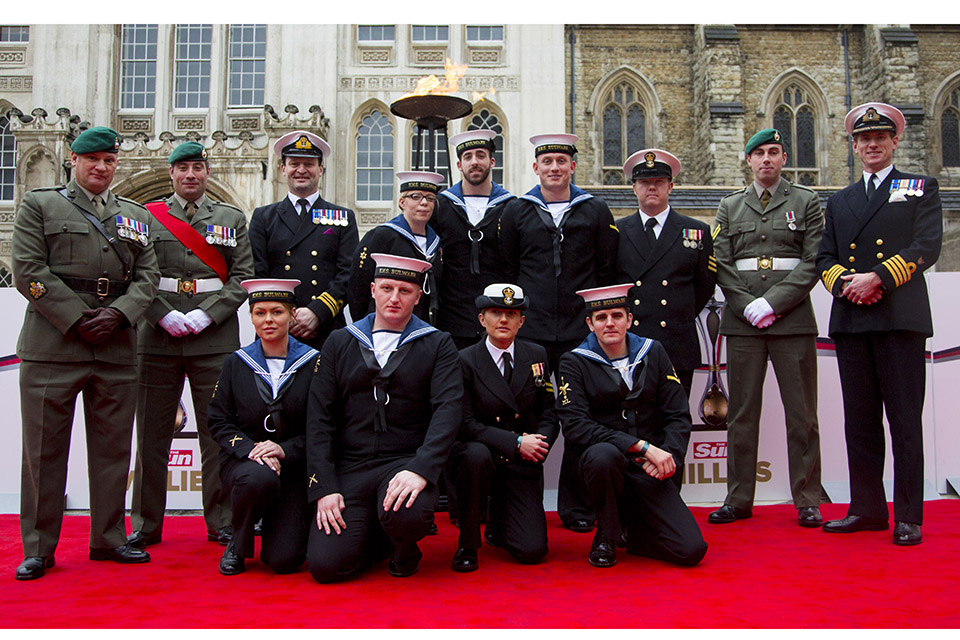 Outstanding Airman Sergeant Michael Beamish was honoured for his Search and Rescue heroism, giving his own blood to help speed a patient’s recovery. He said:


It is a pleasure to have received this award, although I accept it on behalf of my crew. It’s not just me, without them I couldn’t do my job.
​ 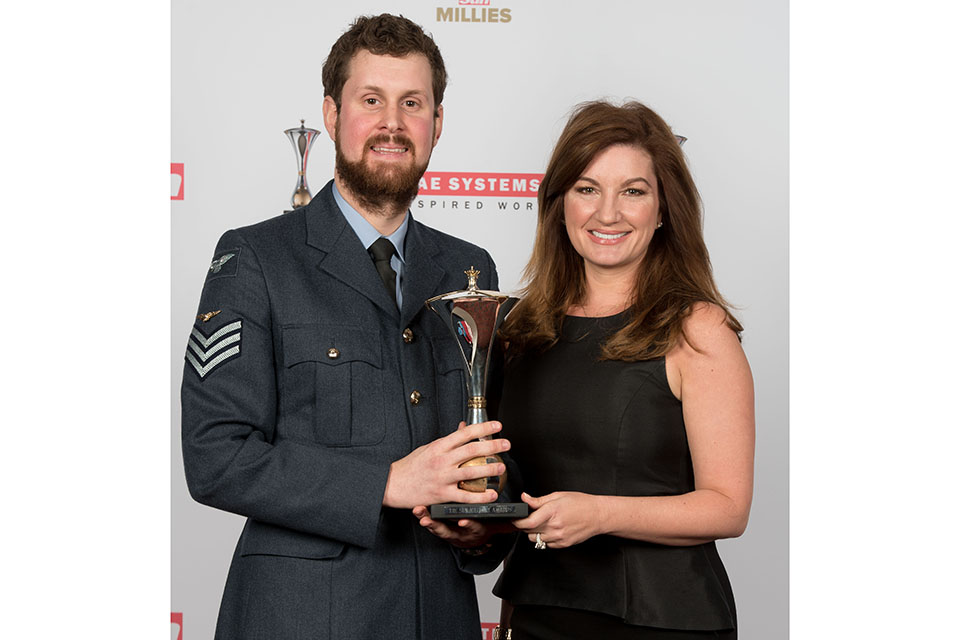 And Major Andrew Todd of the Royal Gurkha Rifles was leading an expedition up Mount Everest when a devastating earthquake struck Nepal last year. His selflessness in sacrificing the chance of rescue to make sure civilians were safe first earned him the award for Most Outstanding Soldier. Major Todd said:


It feels absolutely amazing to have received this award. It is a wonderful feeling, although I don’t want to forget the other 13 people who were with me at that time.

What my team did was incredible and inspiring and I want to recognise them too.
​ 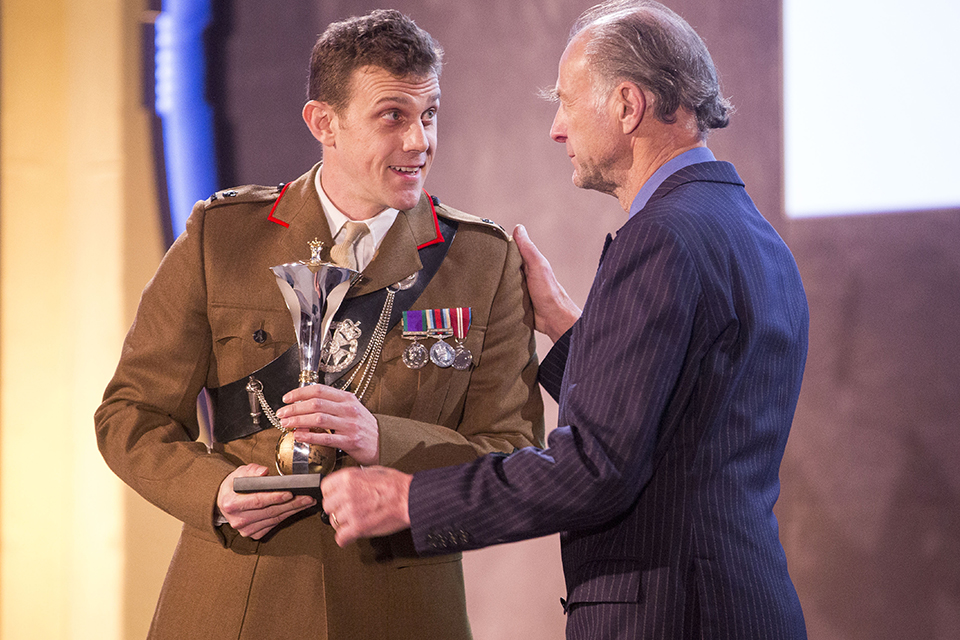 Support to the Armed Forces

Most Outstanding Sailor or Marine