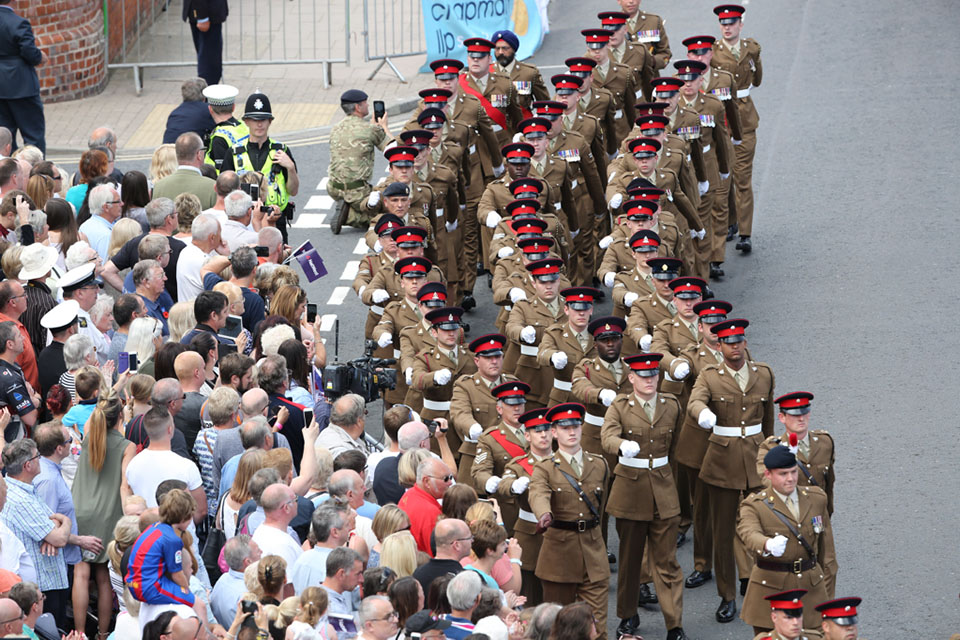 Crowds cheer as the Armed Forces parade in Cleethorpes

More than 250 events including parades, military displays and community fetes are taking place right across the country to say thank you to the Armed Forces community, including Regulars, Reserves, their families and veterans past and present.

From fighting Daesh in the Middle East to training troops in Nigeria and supporting NATO exercises, the UK’s Armed Forces are on duty 24/7. Armed Forces Day is a chance for Britain to acknowledge their hard work and sacrifice.

The National Event was held in the seaside town of Cleethorpes, Lincolnshire, attended by His Royal Highness The Duke of Kent representing the Queen and the Royal Family. 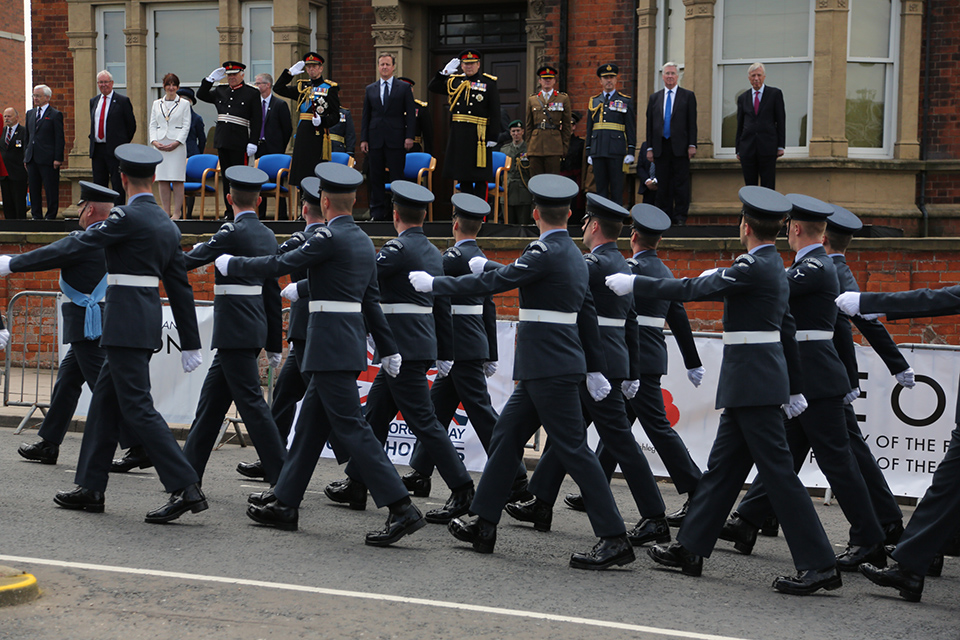 HRH The Duke of York, General Sir Christopher Deverell and the Prime Minister take the salute in Cleethorpes

The Prime Minister was also at the National Event celebrations. He said:


It made me incredibly proud to be in Cleethorpes today to see so many people showing their support for our Armed Forces. As Prime Minister I have seen first-hand the amazing job that the men and women of all three services do. Whether taking the fight to Daesh in Syria and Iraq or helping to deal with emergencies in the UK - their sacrifice keeps us safe.


It is right that we show our support, both by holding events such as this and ensuring that that those who serve or have served, and their families, are treated fairly. That is why we are helping thousands of forces families to buy a home and supporting their children with additional educational funding.
​
Other guests included the Defence Secretary Michael Fallon, Defence Minister Lord Howe, the Commander of Joint Force Command General Sir Chris Deverell and the Worshipful Mayor of North East Lincolnshire Christina McGilligan-Fell.

The National Event began with a spectacular display from the Red Arrows, an amphibious display on the beach from the Royal Marines and a parachute drop from the RAF Falcons. A parade of Service personnel, veterans and cadets then marched down Cleethorpes seafront, from the North Promenade to the Boating Lake, followed by a motorcade of motorcyclists from the Armed Forces Bikers and the Royal British Legion bikers. 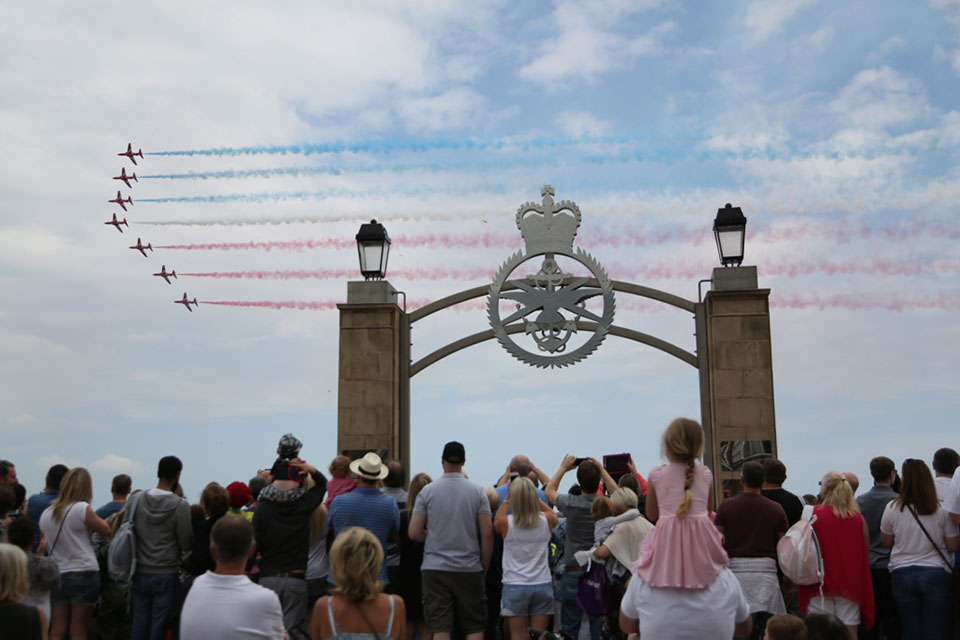 The Red Arrows fly past the Cleethorpes Armed Forces Gate

The Duke of Kent took the salute from the parade on behalf of The Queen and Royal Family.


Today is a day to give something back to the Armed Forces community, which works so hard to keep us safe each and every day.


In the last few years alone, our Regulars and Reserves have helped stamp out Ebola in Sierra Leone, protect the Baltic skies, rescue thousands of migrants in the Mediterranean and help hundreds of UK flood victims at home.


And our debt of gratitude extends to the families they leave behind, and the veterans past and present who have dedicated years of their lives to service. It is only right that we salute them today and celebrate their achievements
​
Afternoon celebrations in Cleethorpes will continue across the seafront with a variety of military displays including the White Helmets Motorcycle Display Team. Overhead the Battle of Britain Memorial Flight, a Chinook and the Royal Navy Black Cats Helicopters will entertain the crowds. 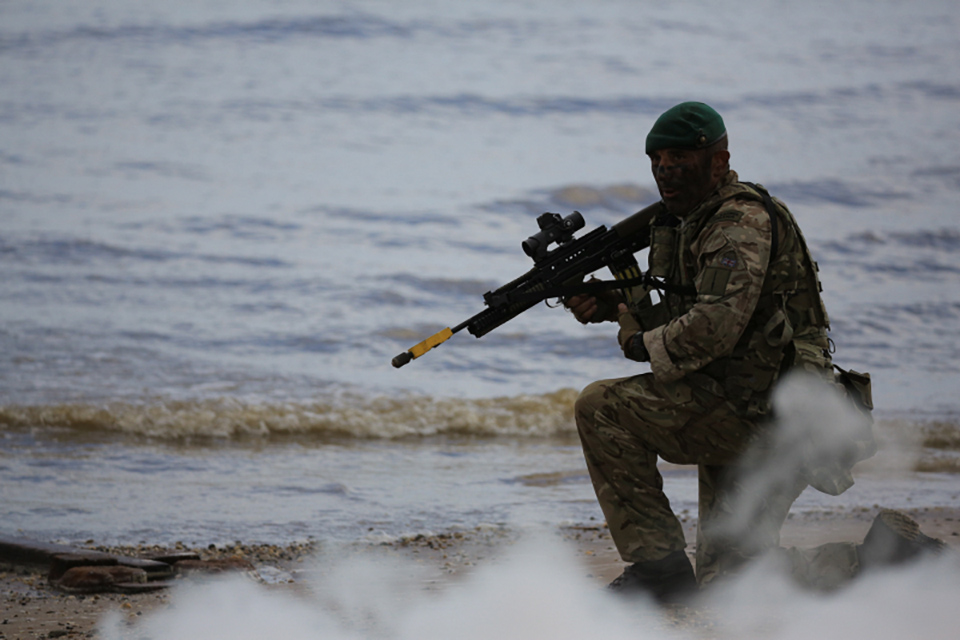 Estimated at 100,000, crowds at Cleethorpes will also be able to see the RAFC Cranwell Band play alongside a Queens Colour Squadron display, followed by a performance by the Military Wives Choir.

An evening of music will close the celebrations with fireworks ending the evening at the Armed Forces Gate.


This Borough is incredibly proud to be hosting such a prestigious event; I am honoured to welcome so many of our serving and past members of our Armed Forces to North East Lincolnshire, particularly in the Award winning resort of Cleethorpes.


North East Lincolnshire has a strong military heritage and continues the links with the Armed Forces going back to the First and Second World Wars, especially with the Grimsby Chums, bomber county airfields and navy operations.


We are delighted to bring together people of all ages from all over the UK to publicly thank the members of our Armed Forces for their bravery, their dedication and sacrifices they make for every one of us on a daily basis.
​ 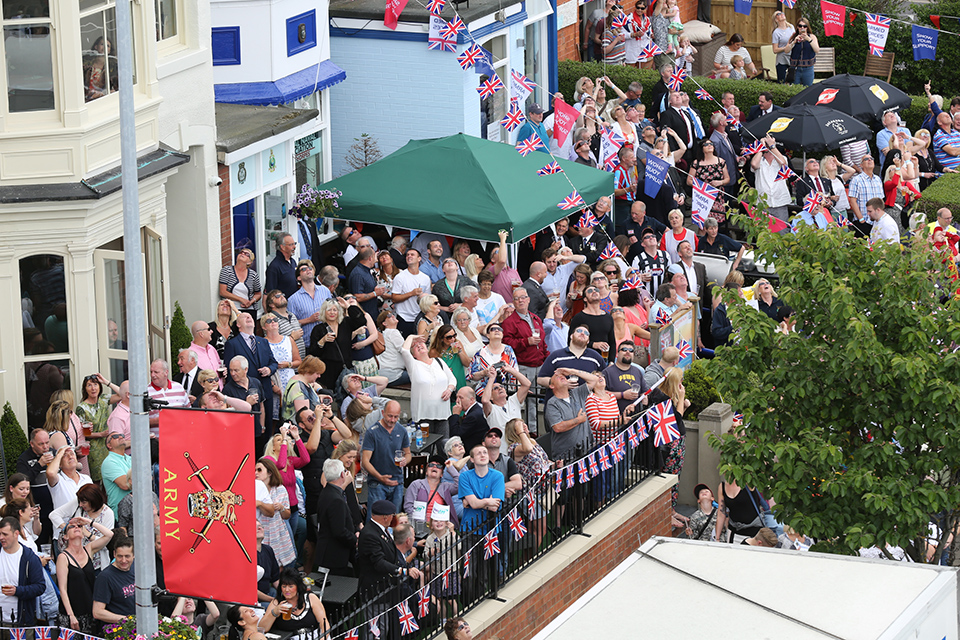 Celebrities and members of the public showed their support on social media with the hashtag #SaluteOurForces. Dame Helen Mirren, Bear Grylls, Christopher Eccleston and the Hairy Bikers were among many to send messages of support by posing for a photo of them saluting.

British businesses have showed their support too. The Royal Mail is postmarking Saturday’s mail with “Armed Forces Day 25 June 2015”, Holt’s Military Banking, run by RBS, is sponsoring the National Event, Morrisons is offering hot drinks to Service Personnel and Aviva is showing its support on London’s square mile by playing an Armed Forces Day ad on their huge public reception screens.