This specialist instructional course hosted by the IPSTC is funded by the UK’s Conflict, Stability and Security Fund (CSSF) and delivered with the support of the British Peace Support Team (East Africa). Ms Jolie’s visit to the region has two distinct but complementary purposes: to highlight the continued plight of Africa’s refugees, marked yesterday by World Refugee Day; and, to maintain momentum behind the Preventing Sexual Violence Initiative, with the day before (19 June) being the UN’s International Day for the Elimination of Sexual Violence in Conflict.

Ms Jolie participated in training delivered to military and police personnel involved in African Peacekeeping Missions who are often first responders following acts of sexual violence in conflict. She spoke to peacekeepers, police and civil society experts about their experience in preventing and responding to sexual and gender-based violence in conflict settings and in their communities. She participated in discussions about how personnel on the course can lead the way in changing attitudes and improving understanding of sexual and gender based violence in their organisations. The Special Envoy also took part in a roundtable discussion on PSVI chaired by the British High Commissioner, Nic Hailey, before an addressing students on the course.


It meant a lot to hear military gender advisors and officers say what they believe and what they want others to understand, that this is not simply about law and human decency. It is about military effectiveness. If civilians do not have confidence in you as peacekeepers your mission will not succeed. And while this training is clearly only a beginning, it is the only way that we will begin to address the problems: working nation by nation to raise standards and increase effectiveness.
​ 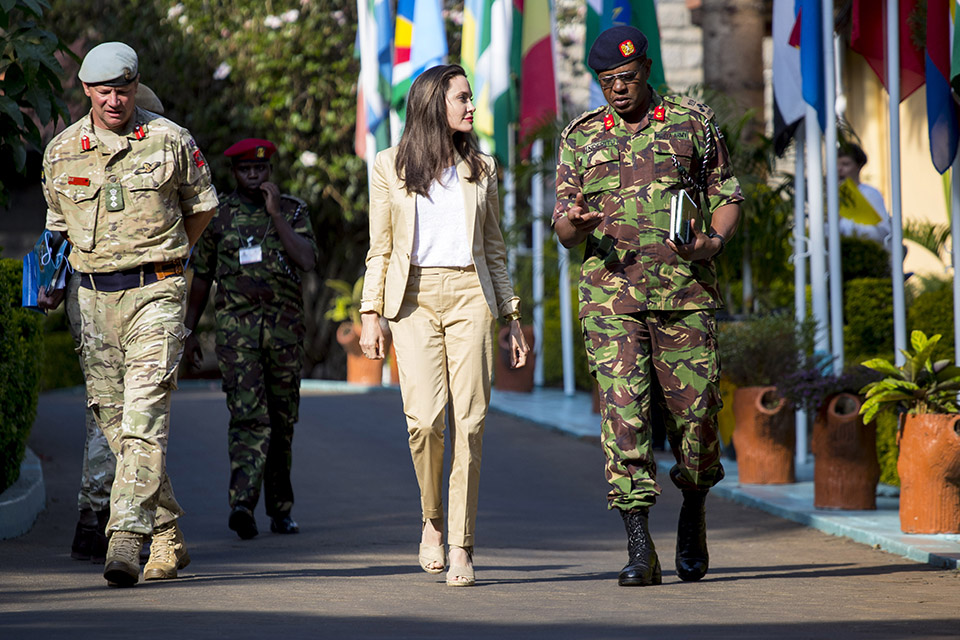 During the visit the Special Envoy spoke to two of the UK military’s gender experts, Major Cleo Bigwood and Captain Kezia Jukes, who are attending the SGBV training at the IPSTC. Captain Jukes is currently deployed to South Sudan as part of the UK’s support to the UN Peacekeeping mission in country, and Maj Bigwood will deploy to the Democratic Republic of Congo in October as the UN Mission’s Gender Adviser. Both are an example of MOD efforts to increase military Gender Advisers, gender focal points, and female peacekeepers, as part of international Women, Peace and Security (WPS) commitments.


This is a fantastic opportunity to share experiences and develop our knowledge on this vitally important topic that affects all levels of society. The British Army is investing personnel and its global experience into this effort.
​
In September last year Ms Jolie spoke at the UK-hosted UN Peacekeeping Defence Ministerial about the need to stamp out acts of sexual abuse by peacekeepers and of the imperative for more female peacekeepers to enhance operational effectiveness and to ensure the needs of the most vulnerable, including women, are met by Peacekeeping Missions. The UK military’s Gender Champion and lead for the Women, Peace and Security (WPS) Initiative, Vice Chief of the Defence Staff General Sir Gordon Messenger, welcomed the Special Envoy to London for the event and continues to work with her in the UK’s efforts on WPS, PSVI and Gender.


I am delighted that Ms Jolie has been able to visit this excellent training for African Peacekeepers and I am proud of the UK’s supporting role. I commend the work of all those committed to International Peacekeeping efforts and thank them for their compassion, dedication and bravery in seeking to prevent violence and restore peace in some of the most challenging parts of the world.

The UK continues to lead internationally on ending sexual violence in conflict and Defence is working hard in support of its partners, the Foreign and Commonwealth Office and Department for International Development, to refine and strengthen the UK’s contribution to this most valuable work.
​ 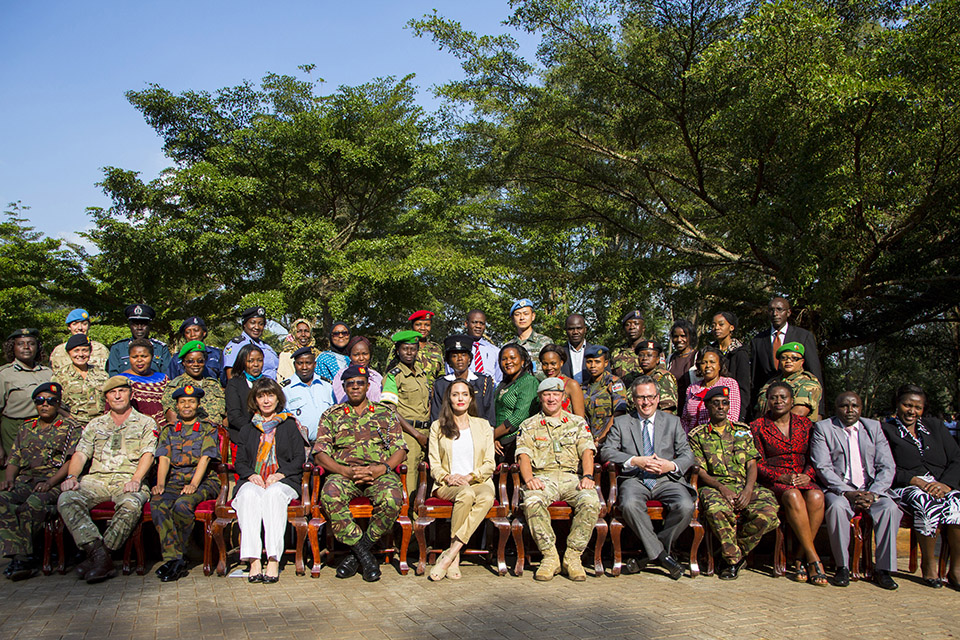 2017 marks five years since Ms Jolie and Lord William Hague founded the PSVI. Since 2012, over 17,000 Military and Police personnel have been trained on sexual violence issues, the PSVI Team of Experts has been deployed more than eight times. £40m in UK funding has been committed so far and we have supported over 70 projects across the world to help end sexual violence in conflict.

The UK’s PSVI priorities for 2017/18 include challenging the stigma survivors of sexual violence experience; delivering justice for survivors, ensuring better access to healthcare, psychosocial support and livelihood programmes; and improving how security forces around the world prevent and respond to these crimes.


The UK is committed to ending the use of rape as a weapon of war. I was delighted that Ms Jolie was able to experience some of the training we provide through our team in Kenya.

We have trained 17,000 military and police personnel in preventing sexual violence around the world since 2012. But there is more to do. The UK looks forward to working with Kenya and other international partners to put an end to sexual violence in conflict.
​
In addition to supporting PSVI work, the BPST(EA)’s mission is to coordinate UK military assistance to Armed Forces in Eastern Africa, supporting security and stability in the region.

So far this year the team has already trained more than 500 Armed Forces personnel from African partner nations, and this number is expected to double by the end of 2017. BPST(EA)’s Training and Defence Engagement takes place throughout the region at various locations, primarily at the International Peace Support Training Centre in Kenya.


Today’s event is a clear example of the UK’s commitment to the PSVI, and the BPST(EA) is proud to play a part in that.

My team will continue to work shoulder-to-shoulder with our African and international partners to support security and stability in the region. Our training and Defence Engagement activity help make communities here safer.
​
Continue reading...