Ministry of Defence said:
Sitting down to answer questions about his newly-awarded Military Cross Captain Michael Dobbin, from the Grenadier Guards, with a glint of amusement, said:

I’m single, 28 and from Reigate, if that’s my ‘Blind Date’ starter question.
​
But after the introductions he quickly gets down to business, explaining the events that singled him out in last year’s summer fighting in Helmand province.
He speaks as only a polished British officer can: clearly, factually precise and dispassionately. He would rather speak of the actions of his team than of himself, and, when he does, it’s with pride and admiration.
Captain Dobbin commanded the Reconnaissance Platoon of the 1st Battalion Grenadier Guards Battle Group, operating almost exclusively in insurgent safe havens during a time of particularly savage fighting:

The area where we fought was forward of the patrol bases. The primary threat was from IEDs (improvised explosive devices), which the insurgents would sow in the treeline. When the crops grow, and particularly at night, it’s hard to spot them or the tell-tale markers.
​
The guys who go at the front of the line can’t use torches, as they would give our position away. They are phenomenally brave guys.
​
Captain Dobbin was recognised for his repeated gallantry by leading his men to victory on 4 occasions against significant odds, one of which led to the posthumous award of the Victoria Cross to Lance Corporal James Ashworth.
On the first occasion, having been ambushed deep behind enemy lines and with insurgents determined to prevent the platoon extracting its 2 casualties, Captain Dobbin waited for the medical helicopter to lift off before launching an audacious counter-attack. 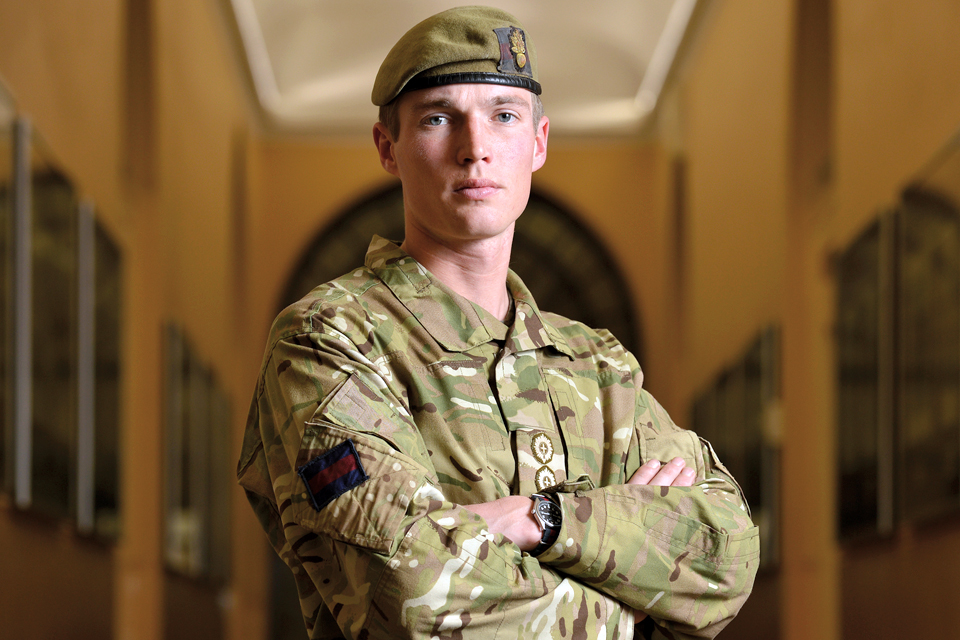 Captain Michael Dobbin of the Grenadier Guards has been awarded a Military Cross [Picture: Corporal Steve Blake RLC, Crown copyright]After 2 hours hard fighting, the insurgents were defeated, having been driven back more than a kilometre. Three days later, Captain Dobbin’s platoon launched an air assault behind enemy lines to take out a tenacious insurgent sniper team.
Landing in heavy fire, Captain Dobbin led his men as they charged across 200 metres of open ground. Although two of his men were killed, he pushed on, attacking with grenades and small arms fire, braving machine gun fire from as close as 5 metres:

The compounds are made from mud with high walls, and instead of streets like a British village the alleys are only wide enough to get a donkey down.
​
So when you turn corners the doorways and apertures that the insurgents fire from can be pretty close range.
​
The action ended with the enemy’s rout. Three days later lead elements of the platoon, emerging from a field of maize, found themselves facing 4 armed insurgents at very close quarters.
A fierce fire fight ensued, with a Guardsman being shot. Again, without hesitation, Captain Dobbin charged the enemy and saved the situation.
The very next day, the platoon, while occupying a temporary checkpoint, again came under ferocious assault.
Attempting to breach the front door the insurgents came face-to-face with Captain Dobbin and attacked him at close range. Grabbing his kit, Captain Dobbin fought off then pursued the enemy.
Inspired by his example the platoon charged after him, enabling the perimeter fence to be secured and a wounded comrade to be treated.
Captain Dobbin said:

Physically the conditions were very exhausting. The enemy had the advantage of fighting on their own turf and laying IEDs, but the morale was great within our very tight platoon.
​
Speaking of his award of a Military Cross he said:

In every single incident I witnessed courageous acts on the battlefield. Whenever I put the medal on I will absolutely think of every man that was in that platoon.
​
It will bring memories of days where things didn’t go perfectly well, but it will also remind me of many, very happy days of working with an amazing platoon.
​
This article is taken from a feature titled ‘An Honour to Meet You’, which has been published in the April edition of Defence Focus, where Ian Carr interviews three Service personnel who were recognised in the Operational Honours and Awards List published in March.
We will publish another Military Cross winner’s experiences tomorrow.

Well done!!:thumbup:
You must log in or register to reply here.