News story: A role model for a generation

Ministry of Defence said:
When Chief of the General Staff, General Sir Peter Wall, presented the operational honours and awards at a ceremony held at Sandhurst Military Academy in March, he said:

The remarkable acts of gallantry performed by these young men and women show that they are role models for their generation.
​
There can be no better example of that than Private Abbie Martin, from the Royal Army Medical Corps. It was the 20-year-old combat medical technician’s very first patrol in Afghanistan last summer when she was tested in a way that most can only imagine.
She was supporting a company operation in the Green Zone, the highly fertile area of farmland, woodland and marshes on either side of the Helmand River, when they fell prey to an insurgent ambush:

We had just left our compound when we were attacked. I was quite naïve and didn’t know what to expect.
​
Naïve or not, while under fire from multiple enemy firing points Private Martin headed across open ground with the platoon sergeant to treat a Grenadier Guardsman who had been shot in the chest:

I’ve never felt so scared in my life. No-one can prepare you for the first time you are shot at. When you hear the whizz go past and you know it’s really close, you feel your heart beating in your head and it’s just so loud, and you think ‘what am I doing here?’
​
But the second you hear that you’ve got a casualty your instincts start going and you just think ‘I’ve got to get there, I’ve got to try and save this guy’s life’.
​
Due to the severity of the Guardsman’s injury, Private Martin stayed with him, conducting manual resuscitation throughout the whole casualty extraction, selflessly exposing herself to enemy fire:

At one point I remember seeing the poppies moving next to me within metres and the rounds hitting a wall behind me. So I knew the bullets were close. But I couldn’t stop working on the casualty. I had to focus on him.
​ 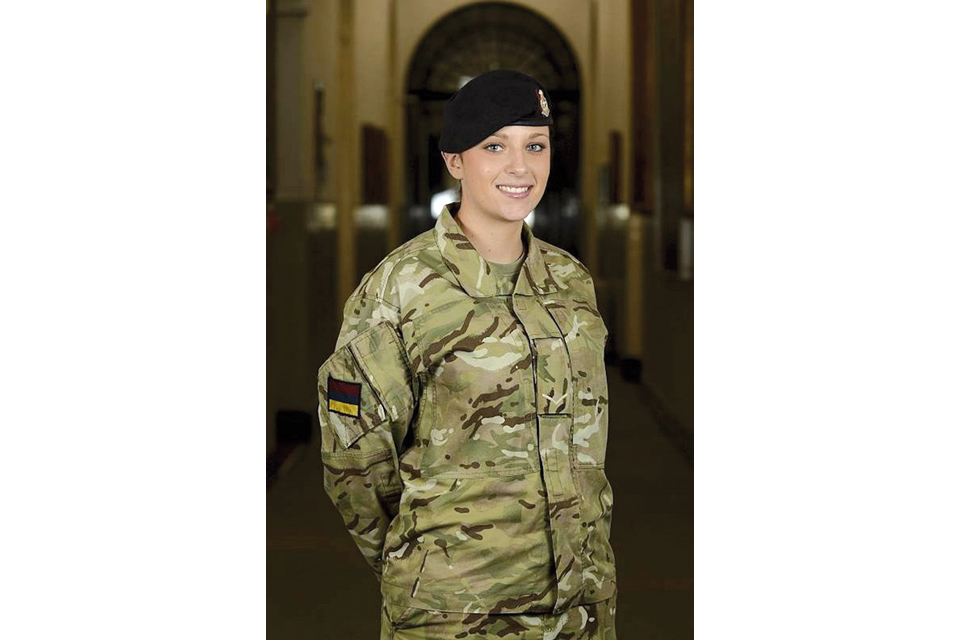 Private Abbie Martin of the Royal Army Medical Corps has been awarded the Queen's Commendation for Valuable Service [Picture: Sergeant Andy Reddy RLC, Crown copyright]Throughout all this, Private Martin had to keep a clear head and make crucial decisions:

They tried to get the helicopter near, but because the contact was so bad they couldn’t land, so they asked me if I could move the casualty 600 metres so they could land safely. But I had to say there was no chance; if we had moved him he wouldn’t have survived. So I made the decision to bring the landing site to where I was.
​
Once safely back in base later that day, Private Martin admits to going through it all in her mind and thinking:

I’m never going out again - not a chance. But then when it comes to it you think ‘they need me, and I need them’. You are scared, but when you are in contact and you look into the soldiers’ faces you know that they’re scared too. Then you know you are not the only one and that you are all in it together.
​
Her mates assured her that she had just suffered a bit of bad luck, having to face all that on her first patrol. But then, barely a week later, Private Martin had to step up to the plate again.
Insurgents had attacked a compound leaving multiple casualties after a grenade had landed inside it:

People were screaming and falling off ladders. At this point I was the only medic so I had to run round triaging the casualties, conducting an initial assessment of their injuries to let the helicopter team know what they would be dealing with.
​
Her citation says:

Throughout each action Martin was steadfast, putting her patients before herself, despite the dangers.
​
On the award of the Queen’s Commendation for Valuable Service, she said:

I feel really proud. I looked around the room at the other people who had been given awards and felt that I didn’t deserve to be there, because they had such amazing stories. I’m such a shy girl. I never thought I would achieve as much as I have in the Army.
​
This article is taken from a feature titled ‘An Honour to Meet You’, which has been published in the April edition of Defence Focus, where Ian Carr interviews 3 Service personnel who were recognised in the Operational Honours and Awards List published in March.