Ministry of Defence said:
Last week the battalion’s two-year-long tenure on the ‘Blue Line’, as the commitment to ceremonial duties is known, came to an end with Z Company, 2 PWRR, completing the final guards for Buckingham Palace, the Tower of London and Windsor Castle.
Significantly 2 PWRR are the last light role infantry battalion to undertake public duties on a regular basis, as they now revert full-time to the Household Division.
The memorable public events of 2011 and 2012 - the Royal Wedding and the Queen’s Diamond Jubilee - involved soldiers from the Princess of Wales’s Royal Regiment parading in the capital.
The last 2 years have not been spent solely conducting ceremonial duties. The battalion played a central part in the military’s support to the Olympics and Paralympics, in addition to 4 rotations providing the garrison of the Falkland Islands. 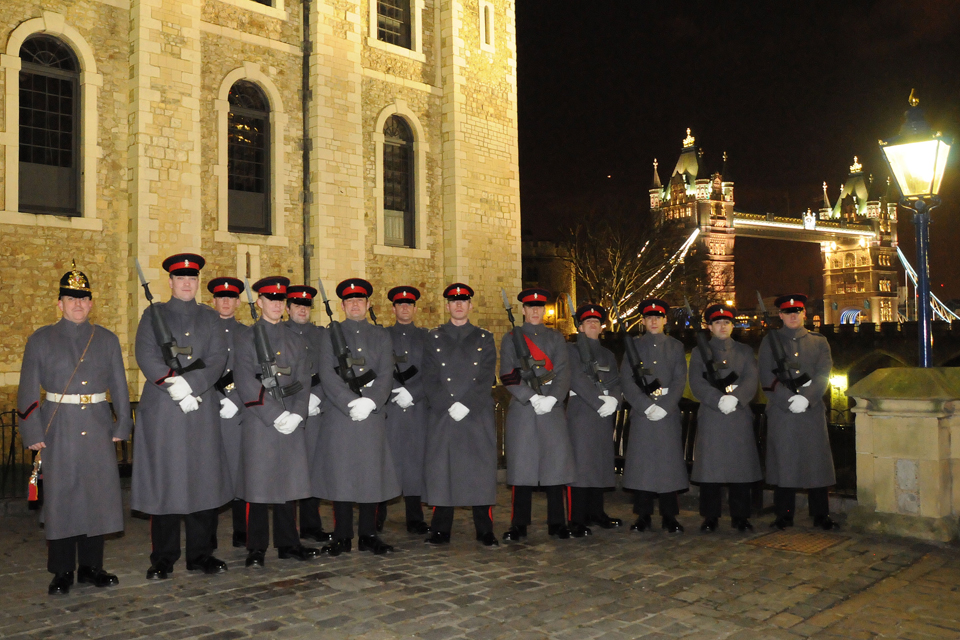 Soldiers from 2nd Battalion The Princess of Wales's Royal Regiment perform the Ceremony of the Keys at the Tower of London for the last time [Picture: Crown Copyright/MOD 2013]The Commanding Officer, Lieutenant Colonel Stokes, said:

The battalion has worked extremely hard to achieve and maintain the highest standards in its ceremonial role over the last two-and-a-half years. The effort has been magnificent.
​
Next we must take forward this disciplined approach to transform to a fighting light role battalion, ready for operations as the Theatre Reserve Battalion in 2014.
​
The next challenge for the battalion is to re-subordinate from HQ London District to come under HQ 20th Armoured Brigade and transform from a focus on ceremonial duties to become a strong light role infantry battalion.
They will need to be ready to deploy to Kenya on Exercise Askari Thunder in May and set for mission specific training and a move to Cyprus as the Theatre Reserve Battalion in 2014.
Captain Ed Farren, who took part in the battalion’s final guards at all 3 royal palaces, said:

Ceremonial duties have been challenging but I and all my men have a great sense of pride having been able to take part in this time-honoured tradition. We can now look to the future and our imminent departure to Kenya on Exercise Askari Thunder.
​