Ministry of Defence said:
RAF SAR units were assigned 9 incidents, and 13 people were directly assisted by SAR teams over the period, including a heavily pregnant woman.
As a result of the snowfall over the past few days, many roads across the UK became impassable, with many drivers being left stranded or abandoning their cars. The SAR crews are at a constant state of readiness, prepared to scramble at a moment’s notice to rescue those who find themselves at risk at sea or on land.
On the morning of Friday 18 January, the UK Aeronautical Rescue Coordination Centre (ARCC) at Kinloss in Morayshire received an urgent request for helicopter assistance to move a pregnant woman with a suspected breach-birth from a minor injuries unit in Frome, Somerset, to specialist medical care facilities at the Royal United Hospital in Bath.
As roads became treacherous, duty controllers at the UK ARCC assigned an RAF SAR Sea King helicopter, which took off from the team’s North Devon base at Chivenor straight into a thick snowstorm.
The aircraft’s captain, Flight Lieutenant ‘Taff’ Wilkins, described the conditions:

The air was very turbulent so we headed out over the Bristol Channel to reach cleaner air. The visibility was below 500 metres and we had to descend to below 100 feet for most of the flight to Frome.
​
At one point we were flying at 50 feet above the sea in order to make a successful transit. After coasting in, we flew at an average height of 70 feet above ground level, making use of roads and other ground features to navigate to Frome.
​ 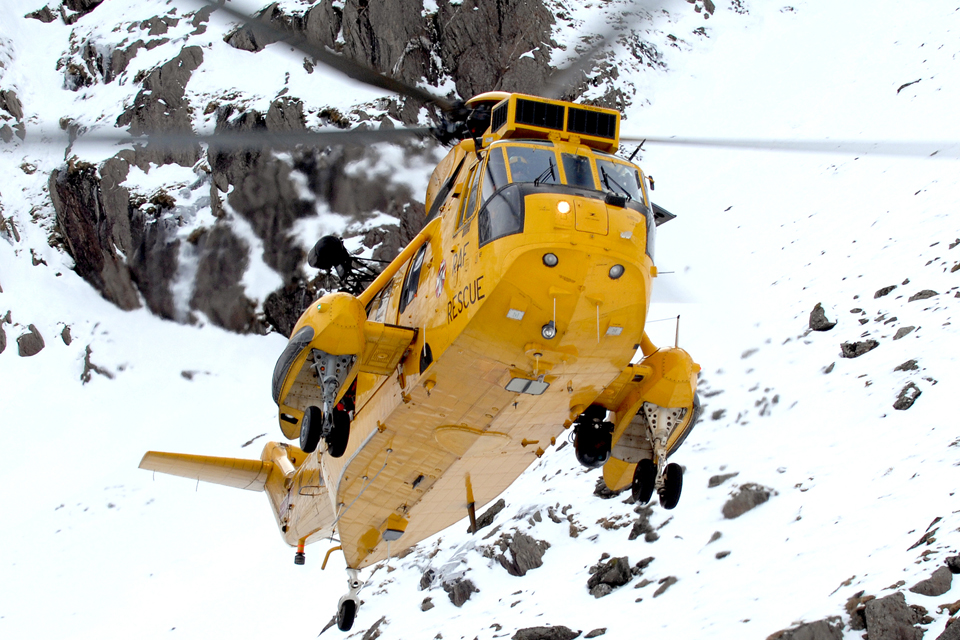 A Royal Air Force Search and Rescue Sea King helicopter on exercise in Snowdonia (stock image) [Picture: Senior Aircraftman Dave Rose, Crown Copyright/MOD 2010]When the crew arrived, conditions were near zero visibility due to the intense snowfall. These ‘whiteout’ conditions arise when a helicopter is landing in snowy conditions.
The downwash from the helicopter’s rotors recirculates the air around the helicopter which leads to a small bubble where the visibility drops almost to zero in the final landing stage.
The RAF’s SAR crews have a technique to help them land in ‘whiteout’ conditions, as Flight Lieutenant Wilkins explained:

We popped a smoke grenade onto the ground next to the landing site as we overflew it on our first pass. The orange smoke provided us with a fixed visual reference to fly to when we entered ‘whiteout’.
​
It’s a standard helicopter technique taught to military helicopter pilots and proved its worth twice for us this morning.
​
After a successful landing at Frome, Flight Lieutenant Wilkins and his fellow pilot Flight Lieutenant Dominic Sanderson checked their engines for any sign of snow or ice build-up while the pregnant woman was taken onboard by stretcher.
Flight Lieutenant Wilkins said:

There was a very real danger that this lady might have given birth during the flight. With the complication of a potential breach-birth, the rear crew had all their medical kit ready to hand.
​
On a clear day, this would have been a very simple nine-mile, straight-line flight, but the heavy snowfall and poor visibility meant that, once again, we had to fly this leg below 100 feet above ground level whilst navigating almost from field to field.
​
We made another ‘whiteout’ landing at Bath Hospital. The lady was taken straight to medical care and we flew back to our base at Chivenor.
​