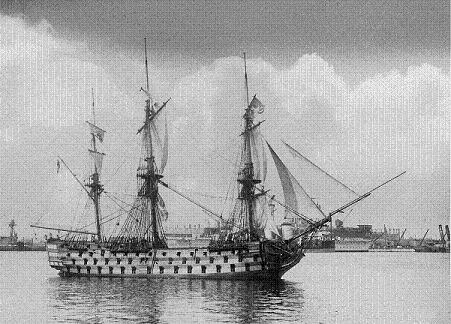 New evidence discovered in the Royal Naval Museum’s archives has shown that HMS Victory, Nelson’s Flagship at the Battle of Trafalgar, was afloat in 1933 for that year’s Navy Week.

While researching Navy Days the Museum’s Head Curator found a logbook kept by a young officer onboard HMS Hood, the famous battlecruiser that was based in Portmouth at the time:

‘The entire Gunroom has had the good fortune to be appointed to the … Victory, which is due to sail for a fortnight’s cruise.’

Previously it had been thought that Victory had entered dry dock in 1922, and had remained there ever since. This fascinating new evidence suggests that in fact 11 years later, with a degree of towing, she managed to sail as far as Dover. The young officer commented further:

Navy Week began in 1927, and was the forerunner of Navy Days. This years event takes place from 30 July to 1 August in Portsmouth Naval Base.

One of the better ones I've seen

I recall that Navy News did an article a few years ago in a similar vein. It involved photographs of a pretty hefty model ( made by dockyard apprentices?) which was big enough to actually carry a crew; this may well be the same ship.

And in the mid 70s, the Portsmouth News ran a story on today's date about a surplus diesel submarine which was about to start a cross-Solent ferry service. The company boss was one Captain Nemo.....

Ladies and Gents, Thank you for playing along. As it is now after 12:00 I should officially announce that this was of course an April Fool.

I have seen a couple of great examples this year.

Best wishes for the month.

Wonder if she can be made sea worthy again ? As it's just what we need to close the Square Rigger gap, following the launch of the French 32 gun frigate L'Hermione.

Apparently (from a reliable source), she dose (as a Commisioned War Ship) have a ready for sea time and a ready for operations time. But where as most ships are measured in days or months, she is something along the lines of 30 years.
You must log in or register to reply here.

Express: "Sail From HMS Victory That Flew At Battle Of Trafalgar Is Tipped To Sell For £3,000"