MPs Expenses - Have your say

The Committee on Standards in Public Life is now taking evidence on MPs remuneration as part of its enquiry into MPs expenses, etc. If you are interested in giving evidence you can do so via the link below.

The issues and questions paper indicating which areas the Committee is seeking opinions on is available (as an MS Word document) below.

There to much. End off.

They take the job with promises to do this that and the other. Bullsh1t really.
They then learn about all of the perks and spend the rest of their time fleecing the system.
It's not as if they are on a bad salary anyway is it!
I would give them the salary and nothing else. Having expenses means they can fiddle the system too easily and it's not like they are all honest in my opinion.

Is there any point?

Ooh, if only all Matelots, Pongoes and Crabfats were as honest with their claims for expenses on JPA. Or "the online cashpoint" as some people like to call it... :twisted: :wink:
S

Before joining I worked down the pits,my union guy[great workmate] went on to become an MP.Returning home after a two year stint on the Chichester and on leave watching Newcatle United[before they went down the shitter]I saw the MP standing in the rough end with us toe rags,I asked him why he was not up in the directors box being an MP,he replied he was one of the boys and would never change.
When he stepped down 25 years later he was fat,rich and obnoxious and in all that time never once stood up to ask a question in the House!
He was a good decent man but the House of Parl.changed him into a greedy twat with no thought for his old workmates.We all boycotted his funeral.
The H of P is a pit of corruption to most who serve.
System needs changing from the bottom and sweep away every trace of this current system where MP's investigate themselves.
Still it gave me a laugh when I saw the sorry state of that MP's camp son,he who started it all.
Thankful for my kids when I see his antics.

I have been to the H or P several times to discus campaigns etc. The only Party that has shown any real interest has been the Lib Dems. Nick Harvey MP shadow Defence, will always turn up and discus possible ways forward. He listens to the issues and aids in putting together questions for Ministers within the H of P.

The Labour Party never sends any of its big guns just their miniuns trying to look important... Then there is the Conservative Party, The masters of obuscation... never willing to give an answer and I would have say 'arrogance is a party must have' before being permitted to be a Tory MP.

We need another Oliver Cromwell to purge the greed out off that nest of snakes.

A LABOUR peer who lives in the East End of London has claimed about Â£100,000 in parliamentary expenses on a flat in Kent that neighbours say has been unoccupied for years.

Baroness Uddin, who worked closely with Tony and Cherie Blair, has been claiming allowances intended for peers living outside London although she resides only four miles from the Lords.

Inquiries by The Sunday Times have established that the baroness bought a two-bedroom flat in Maidstone in 2005 and has named it as her main home to claim almost Â£30,000 a year in accommodation expenses from the House of Lords.

Residents from the five other flats in the same block as Uddinâ€™s property all say they have never seen her there. They could see through the windows that the bedrooms were unfurnished.

Every day another example of the taxpayer being ripped off by the people that govern us is reported .It has now reached the point where nothing surprises me however much is involved.It is rumoured there is worse to come when all the expenses are made public on July 1st.I think we are being softened up so we can't be bothered to look when the time comes.

If you really want to get pissed off about how OUR money is thrown away, then visit this site:

What started as a trickle has turned into a deluge, the whole lot of them should be cleared out as many of them clearly represent themselves and not the people that elected them.

I will be looking at all the individual people standing in the general election for Mid Beds... I will be handing back my membership for the Conservative Party on Tuesday. I am p*ssed off with greedy bast*rds feathering their own nests, and the Tories are no different....

The other day I received a letter from our local Conservative HQ asking if I wanted to donate money towards the local elections drive... The Fcuking cheek of these people.....

In the Duck House

Sir Peter Viggers, a Tory grandee, included with his expense claims the Â£1,645 cost of a floating duck house in the garden pond at his Hampshire home.
Click to expand... 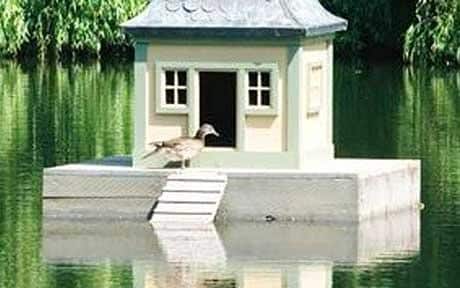 Pity, as he was always relatively pro Navy. In the olden days, he could have got the Dockyard apprentices to make a bloody duck pontoon for nout!

Two more cabinet minsters including Hoon the Buffon have carefully avoided paying capital gains tax on their registered second homes, but unlike carrot to blears Gordon says they did nothing wrong.

Whilst Cameron wields the axe, brown battens down the hatches. Unless he really does something about his cabinet and fast he is a dead man walking and will not write the next Queens speach.
T

Pol, that duck house looks so nice I've just ordered one from the BBC. 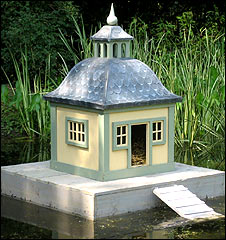 Note the tasteful pale lemon and eau de nil paintwork, the provision of proper windows and a lead roof. If only MPs were as generous in the provision of nice accomodation to Forces personnel as they are to their ducks! :roll:
P

Ooh, if only all Matelots, Pongoes and Crabfats were as honest with their claims for expenses on JPA. Or "the online cashpoint" as some people like to call it... :twisted: :wink:
Click to expand...

The big difference here being, 'an honest mistake' results in some form of CO's table, usually fine and disciplinary action. Which, is ok in a fair world. What these cnuts have been doing is taking the pi$$ - utterly and completely and now they've been rumbled are acting all indignified like small children caught with hand in the cookie jar...

Worst of it is, they constantly claim to have acted 'within the rules'. What rules and where are these laid down? Or, the fact that the fees office has paid out is somehow an indication that these claims were justifiable. Have a look above with the fcuking floating duck house and compare that to what anyone might've claimed on JPA! The problem is, they are greedy, selfish and breathtakingly two-faced, and this mystical all-seeing all-paying 'fees office' is run by the same type of snouts in trough greedy bar-stewards. 'Nuff said.

thingy said:
If only MPs were as generous in the provision of nice accomodation to Forces personnel as they are to their ducks! :roll:
Click to expand...

Be kind to your web-footed friends
For that duck may be somebody's mother,
She lives in a nest in a swamp
Where the weather is always damp.

You may think that this is the end,
Well it is, but to prove we're all liars,
We're going to sing it again,
Only this time we'll sing a little higher.
Click to expand...

Ooh, if only all Matelots, Pongoes and Crabfats were as honest with their claims for expenses on JPA. Or "the online cashpoint" as some people like to call it... :twisted: :wink:
Click to expand...

The big difference here being, 'an honest mistake' results in some form of CO's table, usually fine and disciplinary action...

...The problem is, they are greedy, selfish and breathtakingly two-faced, and this mystical all-seeing all-paying 'fees office' is run by the same type of snouts in trough greedy bar-stewards. 'Nuff said.
Click to expand...

While I accept that they amounts claimed (and their reasons for doing so) are not proportionate, I think you'd be surprised - if not shocked - by the amount that has been fraudulently squandered by missappropriation of the JPA claims system. And while the system may have loopholes that allows some to exploit it, it is not the fault of the system itself - it is morally and ethically wrong to make the claim in the first place.

A good example I heard the other day: a Parent puts aside a few quid a week into a bank account as a nice little earner for their newborn child. Obviously the child cannot spend it themselves, but the Parent might perhaps want some cash to pay for something. So they take the money from the child's account and spends it; they may have the intention to pay it back (eventually) or not. The point is, have they done anything illegal?

Well legally, probably not - the money paid into the child's account belonged to the Parent. But morally it is wrong. Is it the fault of the bank who looks after the account, or the child in whose name the account is held? No - it is wrong for the Parent to even consider taking the money in the first place, so for them to try and blame the system for allowing them to take the money stinks of irresponsibility and a lack of moral integrity.

Whilst I'm not saying that any of the more exuberent claims for expenses are morally correct, I ask you lot this:

If someone said to you "Hey oppo, you can claim for that" Would you?

Of course you fcuking would, and probably have done at some point in the Pusser.

Put the pollies under the Armed Forces Pay Review body umbrella....they will not prosper greatly....??
You must log in or register to reply here.

D
may be of interest

Jun 11, 2011
Drew66
D
S
Is your child benefiting from the Service Pupil Premium