http://www.dailymail.co.uk/pages/li...rticle_id=448615&in_page_id=1770&in_a_source=
Three Royal Navy warships which could have averted the seizure of 15 British sailors by Iran are languishing in a dockyard waiting to be sold or scrapped.


The mothballed minehunters - used as patrol boats around the coast of Northern Ireland until three years ago - would have been ideal to sail in the shallow waters of the Shatt al-Arab waterway where the 15 were taken hostage.

But, instead, the three ships - HMS Dulverton, Brecon and Cottesmore, which cost Â£35million each when they were built in the Eighties - are now likely to be sold to a foreign navy or commercial buyers for as little as Â£200,000 each.

According to naval experts, a 625-ton minehunter would have been more manoeuvrable and able to stay much closer to the inflatable boats in which the sailors were captured than the 4,200-ton Type 22 frigate HMS Cornwall.

Because of its size and the larger draught required, the Cornwall was forced to stay in deeper water ten miles way when its personnel were seized at gunpoint by Iranian Revolutionary Guards.

As its Lynx helicopter was flown back to the ship to refuel at the time of the ambush, there was no 'top cover' protection and the Iranians seized the opportunity to arrest the British sailors.

The minehunters, which are mothballed at Portsmouth dockyard, were potent weapons in the war against terror in Ulster, with sophisticated radar and communications equipment and armed with one 30mm and two 20mm guns - more than enough to have dissuaded the Iranians guards to stay away.

But they were axed as part of Labour's 2004 defence cuts and are among 21 of the Royal Navy's 44 ships now in mothballs, reducing it to its smallest for centuries, as a result of Chancellor Gordon Brown's slashing of the defence budget by Â£1billion by April next year.

Lieutenant Commander Rob Hoole, who commanded HMS Berkeley - a sister ship of the three minehunters - before it was sold to the Greek Navy six years ago, said: "It would be madness to dispose of these vessels in such uncertain times."

But the Ministry of Defence said last night that the minehunters would have been 'unsuited' to the role required in the Shatt al-Arab waterway because they do not have helicopters.

"The only advantage it has got is that it can operate in shallower water because it's got a smaller draught."

But a former Royal Navy commander told The Mail on Sunday: "These ships would have been ideal to carry out this mission.

"They are much more manoeuvrable and would have been perfectly adequate for the job.

"The only reason they were mothballed was to save money, and that decision has proved to be a costly mistake."

Tory Shadow Defence Minister Dr Julian Lewis said: "The main problem is the massively reduced number of vessels in the fleet as a result of its dogma that numbers do not matter in the age of powerful ships.

"But numbers do matter, and Gordon Brown's defence cuts mean we do not have significant vessels for duties like this." 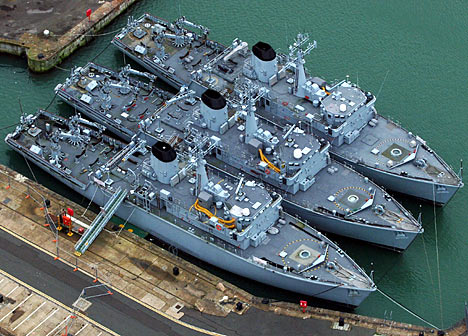 Moderator
Book Reviewer
excuse me? slow GRP mineswipers against rocket armed, high speed RHIBS? I know where I would want to be......

this 'formal Naval Commander' is talking out of his arse... we have done this to death now.

This is Mike Critchelys favourite Bee in his Bonnet. A 15kt sweeper versus 45kt gofasts and fast patrol boats? :roll:

In a harbour near Barcelona there is an old Dingley class minehunter (circa 1950's) which has been re-hashed as a corporate gin palace.
As this vessel is already in the Med and has a top speed of around 12kts and absolutely no armament, perhaps it could be pressed into service.
They can roll up to 30 degrees even in calm water so that should scare anyone away!

As we now know, any publicity is good publicity - after all look at our membership.

Does it matter that this bloke is talking pants? Does your average politician know that? Does it not matter, however, that it is now in the press that we do not necessarily have the resources to do our job?

I'm not sure slanging off people who support the RN in public is particularly helpful. Rob Hoole's quote about it being madness to sell off the three ex-NI Sqn Hunts was lifted from one he made to the Pompey News in Sep 2005. As the much newer Hunt, HMS Berkeley, had been transferred to Greece in Feb 2001, he was asked for his opinion because he was her first CO (1987-9). The concern he expressed at the time had more to do with the general shrinking of the Fleet and the specific reduction of MCM capability from 25 hulls to 16 than with the Hunts' patrol function, especially with the threat (possibly just the threat) of terrorist mining being such a distinct possibility.

The 'former Royal Navy commander' was Mike Critchley as seen from this quote on the BBC website.

"The anti-terror patrol ships currently laid up and for sale in Portsmouth, HMS Brecon, Dulverton and Cottesmore, would have been ideal to cope with the incident and continuing board and search patrols in the Northern Gulf."
Click to expand...

That said, why not beef up the HUNTs' armament and employ them in close-support for shallow-water and riverine MIOPS with a baby-sitting frigate and helo providing top cover until more suitable vessels can be acquired?

Moderator
Book Reviewer
My apologies for mixing up the comments made by the former Lt Cdr and the former Cdr - who really ought to know better. This is not slagging off people who support the RN, just a shot across the bows of those arm chair admirals who are seriously out of date with modern operations and tactics. Any MCMV flotilla in the NAG would require some support and this has been done time and again by using such vessels as the old LSLs or Army logistics ships. My point is that the area of operations is small enough to be covered by up armoured RHIBS, that we already own, without the need to resurrect old, slow and ultimately vulnerable MCMVs.

If, however, we were to talk about the creation of 3 additional Command opportunities..... well thats an entirely different matter...
S

But with a gun onboard, backed up by having a few out there AND a helicopter equipped frigate as 'mother ship' /Scene Commander and a few helicopters in the AIR (helicopters are no bloody use unless they are airbourne in the area - and armed!) we could crack this problem....Oh yes tell the poor blighters doing the job THEY ARE allowed to use the stuff, especially in support of their own staff. But that is asking too much, ain't it!

Whilst I would agree MCMVs are not the ideal vessel they are an improvement, you get suitable armament fro dealing with small vessels, shallow water ability, and command contrl and comms facilities very close to the action. In the case in question such a vessel could be positioned between the target and the threat, would have seen the boats approaching and been ready, and probably given enough warning for helicopter support to have been available. Now if we could resurect the Braves or the US Hydrofoil; boats they would be a lot better, but if you want to do something today you have to use what you have got and make your procedures fit the capability.

Well this is available

PartTimePongo said:
Well this is available

I think despite the obvious attraction that there is a slight possibility that the MCMVs could be made ready and crewed faster.

I wouldn't mind one of these. No armour but you could outrun almost anything. If your going to war go in style. and its Â£19995

A FANTASTIC EXAMPLE OF THIS EXTREAMLY RARE PERFORMANCE POWER BOAT, CAPABLE OF 70 MPH!!!

Â£6k Spent on Engine less than 20 hours ago

THE ONLY SCARAB ANNIVERSARY IN UK!

Cutting minehunters would be disastrous for freedom of seas