Got this from next door - can't blieve it hasn't been promulgated here. Mega BZ Craig

Originally Posted by Ministry of Defence In October 2012, Marine Buchanan was part of an 8-man team tasked to patrol to an Afghan police station in order to conduct low-level training in an area which, apart from one recent attack, was assessed as being safe.

It was about 3 in the afternoon and on the way we passed a checkpoint that we visited often,” said Marine Buchanan. “We knew most of the Afghan Uniform Police there, but on this day we could just tell that the atmospherics were different, that sixth sense when the hairs on the back of your neck stand up.​
But the patrol wasn’t overly worried at that point so they pushed on. They had gone only a few hundred metres more when 2 individuals dressed in civilian clothing approached them from the rear.
Then, in a small field surrounded by high walls and hedge lines, the patrol was suddenly engaged by one of the men, who turned out to be a rogue member of the Afghan Uniform Police wearing civilian clothing. He approached firing prolonged and very accurate bursts of automatic fire at a range of only 15 to 20 metres.

There were rounds all over the place. It was very confusing, you couldn’t really see where your mates or the attackers were because of the dust that was kicking up from the rounds,” said Marine Buchanan.
I then went for cover, and, as I did, I could see the patrol rear man and the second to rear, who was a female medic, were on the ground – so straight away I knew that something was up. My mate who was stood next to me got shot in the leg and in the chest of his Osprey [body armour].​ 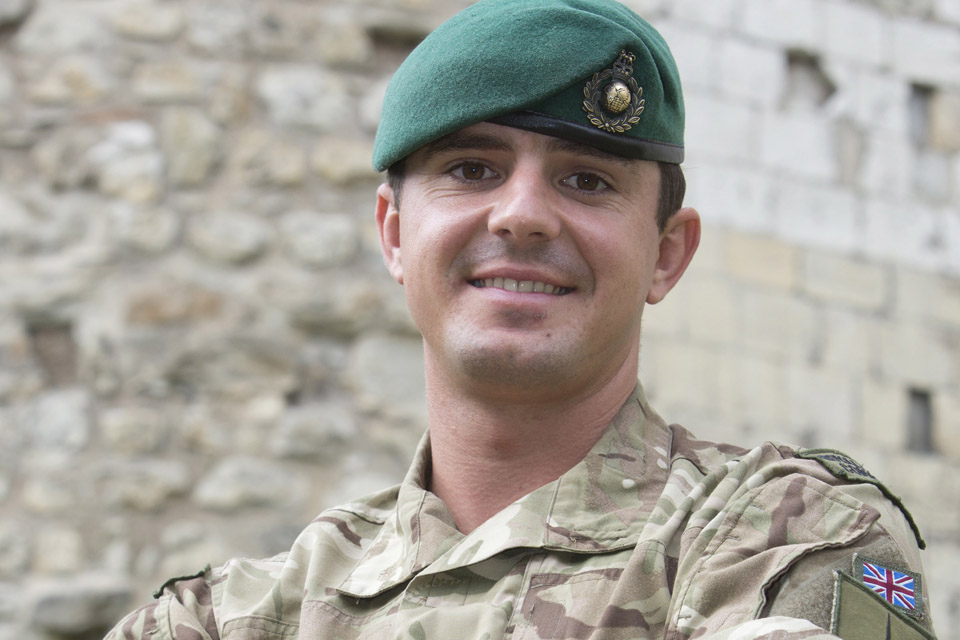 Marine Craig Andrew Buchanan [Picture: Petty Officer (Photographer) Derek Wade, Crown copyright]Unfortunately the 2 patrol members at the rear had been fatally wounded, but the man standing next to Marine Buchanan was saved by his body armour.
At first, Marine Buchanan was unable to return fire for risk of shooting his colleagues and quickly became the only uninjured person that stood between the gunman and the rest of his patrol. Moving towards the gunman, choosing to put himself between the gunman and his fellow marines, Marine Buchanan restrained himself from opening fire until he could be sure that his rounds would only hit the gunman:

When the attack happened I couldn’t get off a clear shot because there was dust everywhere from the rounds the attackers were firing, and I was afraid one of my rounds might hit one of my colleagues. It was a really tough decision to make knowing you could potentially get a shot off but it wasn’t worth the gamble.
Training kicks in massively. The last thing you want is to go down as the bloke who shot one of your mates. It’s every Service soldier’s worst nightmare. So you just have to stay as calm as possible and wait for that opportunity when you can get a shot off.​
Then as the gunman continued to approach him firing on automatic, Marine Buchanan successfully completed the task in hand, and ‘ceased his antics’.
Although radio reports suggested there might still be another gunman nearby, Marine Buchanan immediately attended to the injured marine, administering first aid until the Medical Emergency Response Team arrived. Marine Buchanan’s quick thinking and bravery saved lives and prevented a difficult situation from escalating.
His citation says: “His exemplary gallantry is an inspiration to others.”
On being told about the award Marine Buchanan said:

I was called into the colonel’s office, and initially I thought ‘oh God, what have I done wrong?’ I couldn’t believe I was getting it. And if I hadn’t got it I wouldn’t have felt hard done by or that I’d drawn the short stick. I’d have thought nothing about it and just carried on. It’s massively humbling.​
Marine Buchanan’s is one of 117 awards for gallantry and meritorious service included in Operational Honours and Awards List 41, which covers the period between September 2012 and April 2013.
F

Ditto the above.
P

Typical of the type of guy that joins the RM, best blokes to have on your side. Well done.


Mne Buchanan said:
“I am very humbled to have been chosen for the Military Cross, it is completely unexpected. I am proud but wish it was under better circumstances – if I could give my medal back for my friends who passed away that day I would in an instant.”
Click to expand...

This action saw the loss of Corporal Dave O'Connor RM and Corporal Channing Day RAMC, on 24th October last year. Dave formerly worked as an Assistant Careers Adviser in Pompey AFCO before operationally deploying with 40 Cdo on Herrick 14. RIP both.​

Bloody good effort that man!
Well done Royal.
You must log in or register to reply here.

Community is in shock following the death of an 11-year-old!
2