Cool rain is falling all over Central London and the temperature is low.

Official cheerleaders are here finally. They weren't there for us at the start because they passed a KFC on Saturday evening and refused to leave. 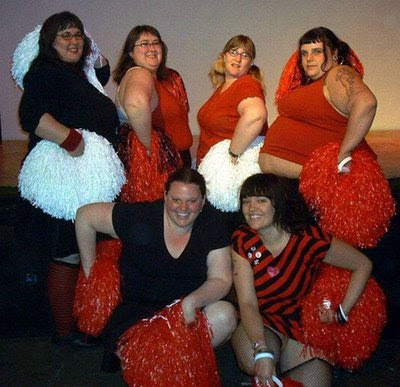 Good effort Tommo, looking forward to reading your account of the day!

Got little sleep and had to be up go from West Hamstead where I was staying with a friend. Got the tubes and train to Blackheath (free travel for runners of the marathon). Trains were packed and I was surrounded by fat smelly people which wasn't nice.

As we got to the start it started to rain although still warm. I got there early which was a good job as waiting for the toilets was a nightmare. Once I had done my business, I gave my bag to be put on the lorry and went to the starting point. I found the relevant point for the pace I planned my race on running.

I was trying keep happy thoughts up etc making sure my mental state in a good place. We slowly moved to the actual start it was crammed at the blue start. 2 mins and a few secs after the official start I crossed the line! That's when the race started and off I went, trying to run my own pace I could see the 8 mile pacemaker not far in front and I thought that was ideal if I kept with him in my sights I'd be happy. Not long after the 1st mile we ended up almost stopping due to some reason, that started to play havic with my mental thoughts. Back on and we cracked eventually meeting up with red and green start racers.

3 miles came pace was good and then crack! My knee went! Great I thought! I'll kept going. 5 miles and my time was alright, 6 miles and that's when needed to pull over to the side and take a leak! It was warm and I was taking alot of water on board, keeping me hydrated was tough as it was hot running in the warm/hot temp.

My pace was already gone now for my first plan so I thought right under 4 hours it is then! My breathing was good knee was agony. Then about 9 miles my groin muscle (the long one pinged too) I wasn't having much luck. Not sure what caused it but having to keep changing pace due to catching slow runners up and having to over take them while bumping into others wasn't helping followed dodging all the thousands of water bottles disgarded.

As I was running I could here people cheering me on. "Come on Tommo, good job!" I had my ipod just low enough to hear them. The route was strange going round abouts getting pushed into the roundabouts and the fences as we went. I kept postive and kept running.

Weather was still warm and hot and it did spit a little but that was it for a brief moment. I made use of the run through showers. Still taking on water and gels and lucozade remembering to pour water over me not the lucozade as it would get sticky.

My pace was still around the 9 mins putting up with the pain right up until 20 mile mark, that's when the plan B went completly Pete Tong! My ipod had been knocked so many times the holder broke and the ipod fell on the deck. "Noooooooooooooooooooooooo" I had to stop pick it up, couldn't leave it behind and that was it, cramp and my knne/groin injuries really did put me in pain! I got my phone out to call my support but couldn't get through cos of bad signal and they were travelling by tube at that point as well. So I started to limp, I actually started to cry, my mental state went from good and postive to the worst. 27 weeks gone wasted! With phone in my hand I tried to shake of the cramp and pain.

About 500m down the road, I picked my self up and dug deep! I'm not going to let myself down or anyone! I got on and went to the pace I could cope with. My fitness was fine, breathing was fine, but legs were gone, I dragged my self through the miles, kept thinking to myself only 5 and half miles to go. The last lot of miles did seem sooooo long!

It hurt, I had no Ipod to take mind off the pain. The crowds still cheering my name as I went past. As I came to 23 miles I was thinking 3 miles come on I can do this, pace and plans were out the window get your self home! Miles felt longer and longer, I got through the 26 mile mark and there was still 600m to go the longest 600m of my running life. I gave it as large as I could! I saw the line and I got across it. I hurt but I wasn't out of breathe, I recovered very quickly from the 26.2 miles but my legs were in so much pain, I had to keep em moving even when they wanted to tag the tag off, and the photo's, I kept them moving the best. Then it was longest walk to pick up my bag and to the meeting point.

So that was basically my race and how it went.

Do I feel slightly gutted yes. I could've nailed under 4 but I didn't. However, I did complete my goal, I did beat the 4 hours 30 min time I applied with so 2 of the important goals I achieved.

In October I wouldn't have thought it was possible. I am a marathon runner! I am an endurance runner! I raised money for a deserving charity and I feel good.

It should mean more to you that you completed it despite all the challenges that you encountered. That is far more telling of your determination than a quick time or a problem-free race plan.

Hope the recovery goes well, and you get to have a couple of beers soon!

Good effort Tommo! Nothing like a few dramas to make the achievement even more worthwhile!

I am speechless with admiration; so many people would have given up once the physical niggles kicked in, but you dug deep and had the guts to keep going; this speaks volumes about you, it really does.

I shall miss this thread and your daily updates.

PS Doing it again next year?

Bz tommo good effort and time, you have earned the respect you will get.

Money will be in this week as promised!!!

You certainly know how to do it the hard way, Tommo. It was a cracking result, especially with everything you had to overcome. So don't beat yourself up. You did it and I'm lost in admiration!
B

Top effort and a good result you finished.

You will never get a good time for the London with so many discarded bottles and prats elbowing each other which I warned you about. We even get that on long distance walks/challenges.

Well I donated a while back if you finished or not you deserved it for all the miserable nights out training. Which I know all about from the past.