"Camilla, Duchess of Rothesay, visited Faslane today to meet the Commanding Officer and some of the crew of HMS Astute.

The visit marks the tenth anniversary of the submarine’s commissioning back in 2010.

As lady sponsor of the nuclear-powered submarine, the duchess also attended the commissioning at Faslane and visited again in 2014 when the submarine returned from her first operational deployment.

On her arrival at the base, she met the boat’s Commanding Officer, Commander David Crosby, who gave an update on the submarine before they went to the shiplift facility where the submarine is undergoing a period of planned maintenance.

Once inside the shiplift, the duchess addressed the ship’s company, thanking them for their ongoing dedication and commitment.

She also passed on her thanks to the families of the submariners for their ongoing support and finished off by saying: “As we look forward to the next ten years of Astute’s service, please know that, wherever you may be, I will be holding you all in my thoughts and prayers.

“I am certain that, just as you have always done, you will continue to carry out your duties with the pride that comes of being at the forefront of our Naval prowess. May you always return safely to harbour.”

Commander Crosby said: “It is a great honour for me to show our lady sponsor her submarine and update Her Royal Highness on the recent challenges and successes of her crew and their families.

“HMS Astute, as the first of class, has been at the forefront of delivering the extremely capable Astute Class submarines into the Fleet for over a decade and I am delighted to have had the opportunity to discuss with Her Royal Highness our next operational period.

“Her Royal Highness, as our Lady Sponsor, has always paid close attention to our progress and regularly sends her gratitude to my crew, and as importantly, their families; to that end, it was a great honour to be granted this opportunity for my team to show their appreciation of her support”.

Due to Covid-19 restrictions, the duchess could not meet families of the submariners during this visit, but she did take a few minutes to present – at a suitable distance – some special awards to a couple of HMS Astute crew members.

The Admiral Max Horton Award for best warfare officer during the basic submarine qualification was presented to Lieutenant Craig Barrie.

HMS Astute, the first of class in the Royal Navy’s most advanced fleet of attack submarines, is based at HM Naval Base Clyde together with her three sister boats, HMS Ambush, HMS Artful and HMS Audacious. 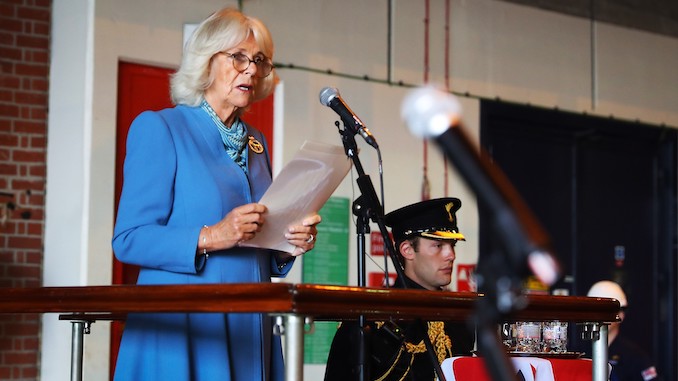 Camilla Duchess of Rothesay, visited Faslane today to meet the Commanding Officer and some of the crew of HMS Astute. [...]

H
Will all submarines be based at Faslane?
2 3