Keeping the UK military on the map

Ministry of Defence said:
When Australian scientists went to have a look at Sandy Island in the South Pacific recently, they discovered that, despite having featured on maps and on Google Earth for years, it doesn’t actually exist.
The experts working at the Defence Geographic Centre (DGC) may well have smiled wryly on hearing this. There is no room in their world for such errors.
The DGC provides geographic information to Defence, predominantly to the Army and the RAF, but also to other government departments, and works in a world of international collaboration, sharing and co-producing geographical information where a reputation for accuracy matters.
DGC’s geographers, or geospatial analysts as they prefer to be called, know that, if you rely on a map which hasn’t been created from entirely dependable source data, the result can get you into trouble. 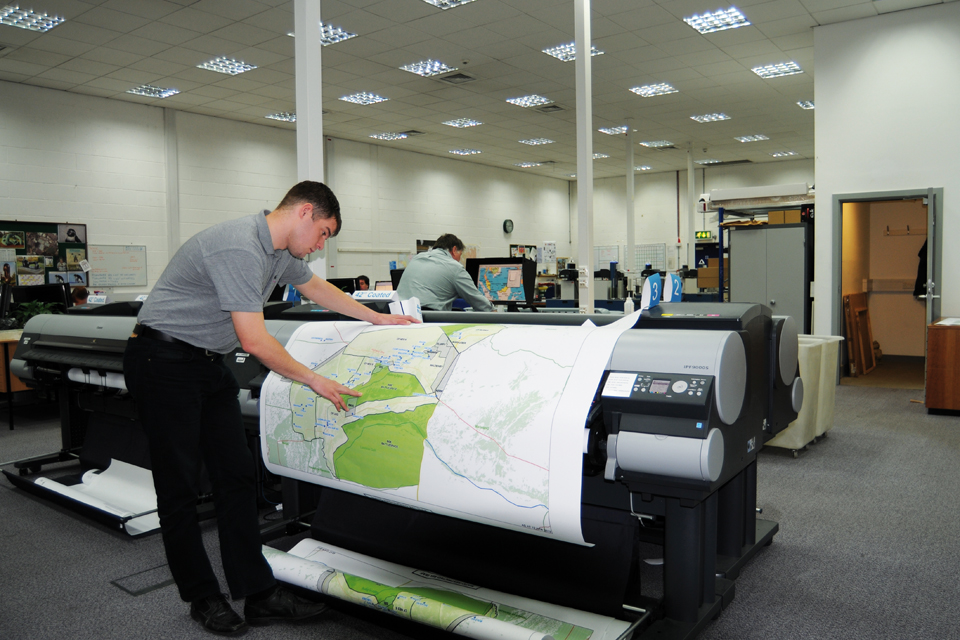 The Defence Geographic Centre has a full range of modern print and production equipment [Picture: Crown Copyright/MOD]But even the best maps are the result of compromise and estimate.

Unless you are on the ground looking at something, geographical information is always an approximation,” said Ian Spencer, Head of Geo Research. “We know how accurate our sources are, and the technical parameters of our sensors, so we know how accurate our products are. We have to work within a defined margin of error for each military product. If it’s outside that margin it’s considered unfit for purpose.
​
It’s true that the DGC augments some of their products with open source material, such as Google Earth pictures, to provide pop-up images of features, but they do it knowing where the risks lie.
But the DGC produces more than just maps, whether on paper or on a screen. After all, a map is just one way of presenting geographical information, and it might not be the best solution for you.
Instead, you might need a database of geographic data to put in a weapons system, or a 3D simulation created from stereoscopic photographs to prepare yourself for the environment through which you may have to fly and control a missile.
The DGC specialises in making sense of a huge mass of data and presenting it to the customer in a way that is going to help them make sense of the world, spot relationships, and make informed plans.

We get 2 types of request,” said Operations Officer Major Jim Danks. “These are ad hoc for a single event or operation, such as disaster relief or support to the Arab Spring operations. And longer term planned work which can include Afghanistan tasks.
​ 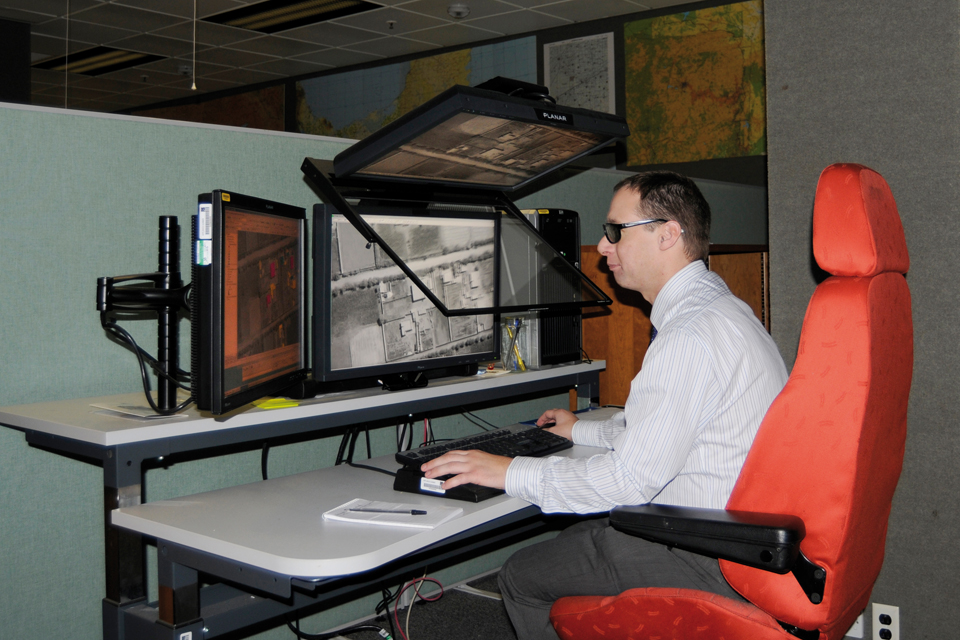 A geospatial analyst using stereographic imagery to produce simulations [Picture: Crown Copyright/MOD]A request may start as a one-off and then develop into a long-term requirement. When Camp Bastion was established more than a decade ago it started as an ad hoc request. Now, as a home for thousands of troops, it is a standard request requiring the provision of many different types of data.
[h=4]International co-operation[/h]Working for Lionel Fewson, Head of Collection, are 5 Collection Officers who could be described as the geographic equivalent of Indiana Jones. They scour the globe in search of useful, creditable data, visiting countries of interest gathering information and making new contacts.
Making maps from scratch is time consuming and very expensive, so international collaboration and data-sharing is very cost effective. Lionel said:

We have memorandums of understanding with 50 countries and links with many trusted commercial suppliers.
​
On the digital side, the DGC is part of a 29-nation programme to capture digital data from various places of interest around the world. In return for their contribution, the DGC has access to the entire output.
A good example of the benefit of co-operation is the award-winning work producing image-based mapping of compounds in Helmand province to improve battlefield and situational awareness.
Working with the US Marine Corps Intelligence Activity, the project has to date captured and referenced more than 200,000 compounds and produced more than 1,100 large-scale maps covering more than 11,000 square kilometres. 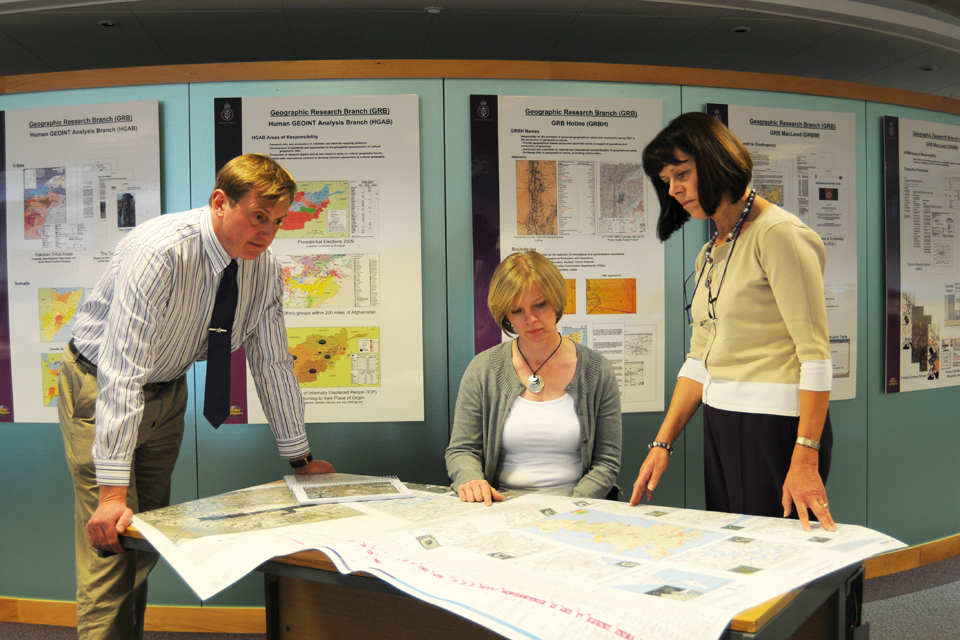 Defence Geographic Centre personnel meet to identify sources for new products [Picture: Crown Copyright/MOD]When it comes to future products, there is a revolution taking place, and the DGC is leading the way. The move is towards making more use of human geography in an ordered way. Ian Spencer said:

We want to develop standards with our overseas partners to define database structures so that we can start capturing information like ethnicity demographics, economics, religion and water control.
​
If you go on the internet you will see lots of people doing things in different disciplines, but at the moment it isn’t connected. We want to pull all this information together in a systematic way so that decision makers and analysts have a better understanding of what’s going on.
​
If we have the basic geographic foundation we can overlay that with all kinds of human activities. Once data is organised then you can share it and exploit it, and when it has a spatial element you can model these factors and see what effect their interaction has.
​
Ian believes that marrying physical and social sciences will open up a new world of understanding, as long as you take into account the assumptions and approximations that have been made. Asking how does factor A affect element B is OK as long as you keep an eye out for any more fictitious islands on the horizon.
[h=4]This report by Ian Carr appears in the December 2012/January 2013 issue of Defence Focus - the magazine for everyone in Defence.[/h]

Keeping the UK military on the map