"Eighty years ago this week, Wick witnessed a scene that was described as "probably the saddest in the history of the town". The event referred to by the John O'Groat Journal was the funeral of 15 sailors from HMS Exmouth, which was sunk by a German U-boat off Noss Head on January 21, 1940, while escorting the British merchant vessel Cyprian Prince.

The Exmouth was struck by a torpedo on her starboard side in the early hours of the morning and sank with the loss of 190 officers and men. A torpedo was also fired at the Cyprian Prince a few minutes later but it missed her.

Six bodies were washed up near Wick, with another nine found on the coast 12 miles away. Wreckage, including a piece of a small boat with the name Exmouth on it, was discovered too. It was thought a number of the men might have managed to get away from the destroyer before she sank and got into lifeboats and rafts, but it seems they perished before any vessel sighted them. All the bodies that were found were taken to a local mortuary.

It was decided the sailors should be buried at Wick cemetery with full military honours. A service was attended by naval, army and air force representatives. Also present were the provost, magistrates and officials of the town as well as representatives from Caithness County Council.

A Church of Scotland minister, a Church of England minister and a Roman Catholic priest took part in the service, representing the various denominations to which the deceased men belonged."

More about the loss of HMS Exmouth here: 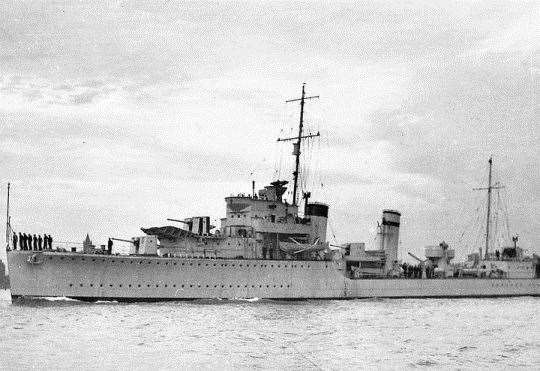 Remembering the Exmouth, 80 years on

Eighty years ago this week, Wick witnessed a scene described as "probably the saddest in the history of the town" after the loss of HMS Exmouth.