I'm looking to join after august 2021 as a submariner either on the UGAS scheme (although I've been told this may have been retired by then) or on the Accelerated Apprenticeship.

Currently I'm on an apprenticeship, and have been advised that with the qualifications I would get out of it, it is certainly worth completing this before joining. The apprenticeship concludes at the end of August/start of Aeptember 2021 (and for financial reasons I won't be taken on afterwards), which is why I cant join until then.

When I asked at my local AFCO, I was told that the HMS Raleigh intake for submariners is in September, which i thought lined up nicely with when I was looking to join. When a recruiter called (after I'd registered my interest on the website), they confirmed that there is an intake in September, and said there was also one around April.

Both the AFCO and the recruiter knew which role I would be applying for, so I don't think that was the issue, but otherwise I have no idea why different people would be telling me different things.

If the intake is in fact in November, this is of course something I'd need to plan for since it would leave me out of work for at least two months.

So, does anyone know when the actual intake times are?

I can't be sure, but I think that, in both cases, the people talking to you have been right, but they have been approaching the matter from different perspectives.

I added a thread to the forum this afternoon about the first batch of Air Apprentices to complete their training at HMS Sultan and I had a look at that because I knew that it mentioned when they started. It says that they started at HMS Raleigh in November 2017, so I am wondering whether November is when Apprentices are starting; could it be so that they come on stream at exactly the right point to start the Engineering part of their training at HMS Sultan? I'm wondering whether Apprentices are joining HMS Raleigh in November and then going to HMS Sultan 10 weeks (plus the Christmas leave) later.

Its certainly possible, although I'm not sure what exactly the factors are which divide people into different intakes?

I had assumed it would be more likely that you'd divide people by their branches. For example those apprentices you mentioned are for the air engineering roles, whereas I had assumed I would be going in with others going for submariner roles.

Especially given that (at least according to the engineering recruiter) submariner engineers go to SMQ dry (I think?) before their "trade" training anyway, so their training pathway would have more in common with other submariners than with accelerated apprentices from other branches.

The first ten weeks at HMS Raleigh are the 'sailorisation' weeks, though, dcj and common to all of the Rating entrants.

Hopefully, WreckerL will be online later on, he will be able to shed some light on this, I think.
D

Thanks for the help. It could certainly be either way, I honestly have no idea (obviously as I've never been through it), just throwing out guesses.

Out of interest, do you know if the HMS Sultan courses are role specific? For example would a submariner be on the same course as an engineer going into the surface fleet or air arm? Or are there bits that are specific and bits that are general? I was told it was more "job specific" than what I've already done (as I've already completed my BTEC level 3 engineering through my apprenticeship) but I wasn't told to what extent it's seperated from other engineering roles in the navy.

Is this your intended role, dcj? 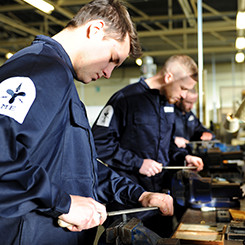 This is your opportunity to be part of one of the Royal Navy’s most elite teams – and join one of the world’s most respected engineering apprenticeships. You’ll be paid to study for a degree in Mechanical and Manufacturing Engineering, and gain...

That's it, yes. Unless the UGAS scheme is still an option in which case I'd be applying to that.

Super Moderator
The Engineering courses at Sultan are in two streams, Marine and Air and are seperate from each other although there are common elements such as academics and skill of hand in the workshops.

Submariners and surface fleet train together, on completion submariners go to the nuclear school(still in Sultan) before going to SMQ with other trainee submariners in other branches.

That was how it is for those not on accelerated advancement so I don't see it changing as there won't be enough submariners on course to justify seperate courses.
D

I see, so its a case of sharing the "general" stuff, and seperating for your role specific stuff.

So SMQ is after Sultan? I was told the order was Raleigh, then SMQ, then Sultan.

Super Moderator
It's always been the other way round but I can confirm that on Monday.
D

I would appreciate that, thank you.

Super Moderator
Sorry for the late reply but it is career course followed by SMQ with the usual caveat of subject to change !

B
Will i miss February Intake?

Nov 12, 2015
boyonboat
B
R
Issues with waiting times for AIB and lack of communication from AFCO
2