Is there anyone out there old enough to remember HMS Wildfire? You are properly in your late 60's to 70's. If so please get in touch with any tales you have to tell.

Book Reviewer
Redkite, my late Father spent time at Wildfire during the War, part of"Harry Tates Navy". He, as with many others never spoke of his time in the RN. I would be interested in any details you can give of Wildfire. Could you keep to one thread (like this one) though, I see that you have made a previous post elsewhere. It makes it hard to follow. No one will mind how much space you use, especially if you have factual history bits and pieces to tell
R

Hello Janner, Thanks for replying & showing an interest. As you have seen my other post you will be aware I was just a kid while resident in the dockyard so will not have any knowledge of the life style of the ratings in Wildfire. But will be able to comment about life in & around the dockyard in the early 1950's. As far as I can recall the area outside the dockyard (Blue Town) was a bit notorious, with the pubs,girls etc so of course was off limits to me. But as I was in the choir of the Dockyard church which was just outside of the perimeter wall I & some of the other lads were able to gain some very interesting insights in to the goings on of a Friday evening after practise before returning to the confines of the family home. I do recall a very odd bloke by the name of Big George, he was big, tall, broad & ugly, but a very gentle chap & he used to escort the WRNS's back to the main gate so that they came to no harm. My father & the other policemen used to reward him with cigs & tobacco because it made their jobs a bit easier.
Within the residential area were some gardens not unlike allotments, & as there were some stables in the dockyard (yes that's true) we had loads of manure delivered by horse & cart. The horse from my perspective was as large as a shire, I'm not sure how many there were but they used to do all kinds of hauling jobs & could be seen all over the dockyard.
Getting back to the church choir for a moment , at Xmas time we used to be taken out to one of the ships by launch to sing carols to the ships company, which was ok by us as we got to eat more ice cream than most of us could manage or had ever seen before. Remembering it was only 5 to 6 years after WW2. Well hope this post & the other one has given you a bit of an insight into dockyard life from a boy's view. If any thing else comes to mind later & I'm sure it will, I'll get back on.
Still would like to hear from any others who might have some memories of Wildfire & Sheerness.

Just when you thought it was all over. There is an old B&W film about the ''little boats'' going over to Dunkirk. I'm sorry I can't remember the title but one of the scenes in it was taken in Wildfire. It's a scene when the boat owners are trying to register their boats & getting tangled up with naval formality. Perhaps some film buff might recall the title & advise us.
S

I would be particularly keen to hear anything about the cornwallis jetty at wildfire.
R

Hello, Spearfish, Can't help much there I'm afraid. I can remember the name but nothing much comes to mind. I have a map of the layout of the dockyard & the Cornwallis jetty is shown there with Cornwallis ( Hulk) noted by it, near to the Great Basin.
I have a small book called ''Royal Dockyards in Camera'' by Philip MacDougall, published by Quotes Ltd. It has some very interesting pictures including some of Sheerness, you might be able to get it from your local libary. the ISBN is 0 86023 365 2. Hope this has been on some help.
S

I have seen the book you mention I also have some photos of Cornwallistaken just before she was cut/blown up.The teak hull was so strong the demoliton team resorted to explosive!
R

Hello Spearfish, Dare I say they don't make 'em like that any more.
Have you tried WWW.CORNWALLISMUSEUM.CA link to HMS Cornwallis or WWW.SHEPPEYSEACADETS.CO.UK link to History.
N

I refitted the Barnstone in Sheerness in '56, but I'm afraid I don't remember much about the place. I do remember the dockyard horse, we christened it Diving Suit because that is just what it looked like. I'm talking about the old standard diving suit although I have vague recollections of a race horse at the time by the same name. I know the driver didn't go much on it and used to chase us when he saw us.
At stand easy we used to go across to the canteen in Wildfire for coffee and wagonwheels. The wagonwheels seemed to be a lot bigger in those days or is my memory playing tricks.
R

Hello Neil6814, Thanks for your input. ''Yes'' I agree about the Wagonwheels, they were bigger (& Mars bars & Crunchies). Nice to hear that they were still using horses in '56, I had left by '52, wonder if it was the same one.
I have found out something else during my time there regarding the submarine Truculent. It seems it was on trials in the Medway with dockyard workers & crew on board when it was struck by a Norwegian tanker & sank. When raised it was brought into Sheerness for repair. I don't know about the lose of life but there must have been some. My father, who was on duty at the time said that the BBC sent in a female reporter named Renee Cutforth to do a report on the incident. This would have been for radio I think.

Book Reviewer
Most of Truculents crew were lost not in the initial collision but were swept away during the escape, I believe most died from exposure
P

REDKITE said:
Is there anyone out there old enough to remember HMS Wildfire? You are properly in your late 60's to 70's. If so please get in touch with any tales you have to tell.
Click to expand...

I was on a HMS MUTINE, an Algerine sweeper, there in 1957, where we eventually paid her off, and we moved into Wildfire buildings as soon as we stopped engines for the last time.

Wildfire was a unique base as there definitely, was not another shore base like her in the "Andrew", mainly due I suppose to the number of patrol boats and small ships that used the moorings and dockyard.

Everything about it was casual, and very laid back. Even in Wildfire it was small ship routine, no Bull**it, everything "Pusser" was kept to the minimum, you wandered into the galley on Saturday and Sunday mornings either to help the chef, or to cook your own as many times he would be hung over, you could choose whatever you wanted for breakie, as it was so casual.

At weekends we would all stand round the galley stove and skite about last night run ashore, it could have been the way that many small Chatham bases were run, [this was the only time I got near to Chatham], but it was a matelots dream posting, mine was too short, only until we unloaded stores etc.

As Isid I had just come of a sweeper, where it was canteen messing, ie. where the killick of the mess gets so much money to catter for the mess for a month, if you run out of cash then we all had to dip into our own pockets, to buy something from the Naafi Store, or from the Tanky. One of the last dinners we had before the next months allowance was due was "Kippers and Custard" hmmmm sounds bad, well it was, as it was all on one plate :roll:If you didn't use all the money that was allowed to the mess, you of course got it to split amongst you :lol: :lol: :lol: :lol: It never happened. :cry: :cry:

The jetty and the old hulks there, Cornwallis jetty, were great places to fish, and I got quite a feeling when I walked over them. I was fascinated by the names that were carved into the timbers, trying to figure if they were from old matelots, or from prisoners who had been on the hulks. When you saw all the work that went into building a ship of the line you could really appreciate, the skill to built something as huge as these vessels had been.The old Chippies would cut numbers and letters into the beams whilst they were still on land, so that when they went to the hard where they were being built, the shipwrights new where every bit went.

I caught my first lobster there, I'd never even seen one before this, so I was quite chuffed. It was caught, cooked and eaten in Wildfire.lol

I'll try to see if I have any photos of "Wildfire" or the old hulks, if I find any I will post them, I lost hundreds of photos a few weeks ago so these may have been amongst the ones that I lost.

Book Reviewer
PB good post, very good for those of us that have an interest in the history of Wildfire or the RN in particular, lets hope you have some luck with the pics
R

Hello,pingbosun. Thanks for all that information,a great post. Any others out there with more info to impart :?: redkite.
2

Hello and welcome Redkite,
Can't tell you much about Wildfire I'm afraid, but can vouch for the fact that Rene (pronounced Renay) Cutforth was a bloke!
Also I think your old film was simply called "Dunkirk". One of Richard Attenborough's first starring roles as I recall.
Best wishes,

I was down in Portsmouth for a weekend only recently, and thought it might be interesting to have a look over the Mary Rose. After that I wandered into a 'Nauticalia' shop where they also had a free dockyards museum. At the entrance to this exhibition I saw this and couldn't resist photographing it, because like Phil1972 I'm also based at HMS Wildfire and this just caught my attention!

This ship was another long time Sheerness resident.She was formally HMS Agincourt: 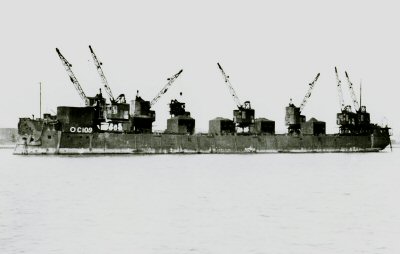 Hello,2badge_mango & peter, Well 2bm whats in a name, perhaps he had a funny walk :roll: Thanks for the film title, I'm sure there must be a DVD of it, I'll try & get it.
Peter, thanks for the pics. redkite
N