HMS Prince of Wales To Make Inaugural Visit To Liverpool

"
Royal Navy aircraft carrier HMS Prince of Wales will visit Liverpool later this month in a demonstration of the Naval Service’s close ties with the city.

The second of the Royal Navy’s giant new aircraft carriers will arrive in the city on 28 February for a week-long visit packed with celebrations and engagement with the local community.

People will also be able to step on board over the weekend of 29 February – the first time one of the new aircraft carriers has officially been open to visitors.

HMS Prince of Wales is affiliated with the cities of Liverpool and Bristol. Affiliations in the Royal Navy mean a close bond between a ship and the communities she is tied with.

Captain Darren Houston, the Commanding Officer of HMS Prince of Wales, said: “My ship’s company and I are hugely excited about our first visit to Liverpool. This is an opportunity for us to cement our bond with the city as one of the newest warships in the Royal Navy’s fleet.

“We’re looking forward to hosting people from the local community on board during our time alongside, and I know we will receive the warmest of welcomes.”

HMS Prince of Wales is one of the most powerful surface warships ever constructed in the UK. Along with her sister ship HMS Queen Elizabeth, they are the largest ships ever built for the Royal Navy.

Her punch is provided by F-35 Lightning fighter jets as she deploys around the world in a naval task group.

With an expected service life of up to 50 years, the floating cities of the Queen Elizabeth-class are highly versatile and able to meet the widest range of tasks around the world.

The ability to move 500 miles per day – combined with the speed and range of the F35 jets – means these carriers can react at very short notice and make a difference around the globe.

Commodore Phil Waterhouse, the Naval Regional Commander for the Royal Navy in the north of England, said: “I’m delighted HMS Prince of Wales is visiting her affiliated city so soon after her commissioning. It gives both the city council and the ship’s company the opportunity to further build upon their strong bond – a bond that was established during build and that will be in place for the next 50 years or so.”

HMS Prince of Wales was formally commissioned in to the Royal Navy fleet in December, at a ceremony attended by the Prince of Wales and the ship’s sponsor, the Duchess of Cornwall.

The ship’s flight deck is 70 metres wide and 280 metres long – enough space for three football pitches. Her ship’s company make their way through 170 metres of sausages a day, which is roughly twice the height of the Liver Building.

She has a ship’s company of 700 sailors, which will increase to around 1,600 with aircraft on board.

“The sheer scale of the ship will be a real spectacle on the River Mersey and is set to attract national and international attention, drawing massive crowds.

“Maritime events always prove to be hugely popular in Liverpool, and this will be no exception. Once again our world heritage waterfront will provide the incredible backdrop for a striking vessel, and we look forward to welcoming her at the end of the month.”

Exact timings for the ship’s arrival in Liverpool, and details of how to obtain tickets to visit the ship, will be announced in due course, dependent on weather conditions and operational commitments. 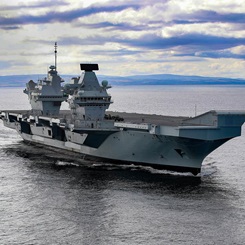 Royal Navy aircraft carrier HMS Prince of Wales will visit Liverpool later this month in a demonstration of the Naval Service’s close ties with the city.

This is apparently a ticketed event, how do we purchase tickets for this
Thanks

Flowers99 said:
This is apparently a ticketed event, how do we purchase tickets for this
Thanks
Click to expand...

To the best of my knowledge, the tickets for the Liverpool visit haven't been made available yet.
F

Thank you for your reply x

My 8 year old nephew is beside himself with excitement, future Matelot in the making. The poor lad is counting down the time until he can join the Sea Cadets, and he loves the "Cruel Sea"

Him and his Dad are going over from Manchester

Memories - 'the movie Cruel seas is now showing on the Fo'csle'........I bet they don't make that pipe anymore, it's all individual mess movies on disc now probably

I remember having to use a torch to illuminate the soundtrack of Jaws when we tried to watch it in Kellington in 1978 - the auxiliary lamp in the projector failed and we didn't have a spare!
C

Remember my last run ashore in Liverpool 1970 (?) Big 'E', riggers run and treated like royalty at the Shakepeare Club (does it still exist) table right next to the stage and and sharing beer with the main act - Harmony Grass I think, all a bit hazy now - time and liquid refreshment induced!!

Chris P said:
Remember my last run ashore in Liverpool 1970 (?) Big 'E', riggers run and treated like royalty at the Shakepeare Club (does it still exist) table right next to the stage and and sharing beer with the main act - Harmony Grass I think, all a bit hazy now - time and liquid refreshment induced!!
Click to expand...

Is a shame the Grafton is closed, that would have been the ideal matelot night out.

The only place I've been in the UK where the bouncers wouldn't let you out unless you lived 3 doors down or there was a taxi waiting for you. I also met a young lady (ok not so young) went back to hers and she set an alarm for 5am!! she said you'd best be out before my hubby gets home from the car plant

Next morning wandering around the roughest part of Liverpool not knowing where I was, I remember seeing three young lads (about 5 or 6) playing football and looking like they had been out all night.

Joint_Force_Harrier said:
The only place I've been in the UK where the bouncers wouldn't let you out unless you lived 3 doors down or there was a taxi waiting for you.
Click to expand...

I got a taxi from centre of town to where the ship was parked. Right up the end of the dockyard near Crosby (ship was actually visiting Lancaster and they didn't want us parked in Liverpool because no-one would get to Lancaster). With about a mile to go I noticed on the clock that I was about to run out of money - so I told the driver to drop me off. He said 'not round here, no bloody chance!' and turned the clock off.
Restored my faith in scousers - well, mostly
J

Would be amazing to see this in the 'flesh'. Is there any further info on how to obtain a ticket etc?
Cheers 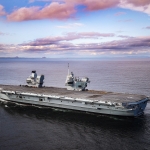 Visit the Royal Navy aircraft carrier HMS Prince of Wales as she docks in Liverpool in a demonstration of the Naval Service’s close ties with the city.

To the best of my knowledge, the tickets for the Liverpool visit haven't been made available yet.

Book Reviewer
This may be a better link for tickets https://www.ticketquarter.co.uk/Onl...&BOparam::WScontent::loadArticle::context_id=

janner said:
This may be a better link for tickets https://www.ticketquarter.co.uk/Onl...&BOparam::WScontent::loadArticle::context_id=
Click to expand...

All tickets are now gone apparently.

The ticket touts will have a field day

fishhead said:
The ticket touts will have a field day
Click to expand... Some companies are offering tickets as part of a travel package

www.liverpoolecho.co.uk
You must log in or register to reply here.

Bristol Live: "Why One Of The World's Biggest Aircraft Carriers - HMS Prince Of Wales - Is Linked To Bristol"

HMS Prince Of Wales To Arrive In Portsmouth on Saturday, November 16th 2019