For years they have wondered precisely where and how their loved ones lost their lives.
Now, more than 70 years on, relatives of 58 sailors lost when a British submarine was sunk during a German attack are planning to visit the spot where it went down.
It promises to be an emotional journey, especially as it might never have been on the cards. The wreck of the HMS Narwhal was only discovered by accident when members of a Polish diving team came across it while searching the North Sea for one of their own missing subs.... 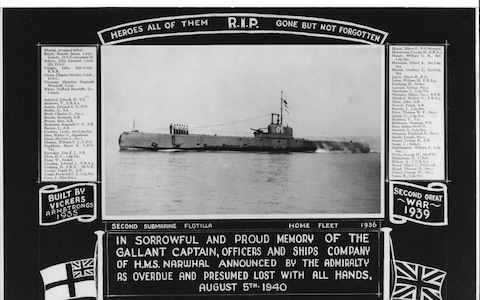 ...Tamara Lo, the daughter of the Narwhal’s Captain, Lieutenant Commander Robert Burch, said: “I was two in 1940 and only have the vaguest 'memories' of my father - rather like short loops of film. “So, after nearly 8 decades of knowing about the loss of the boat, the information that divers had found Narwhal made me cry. I never realised how numerous the crew was.” Mr Clandon, Mrs Lo and other relatives of those lost on board are to meet next month as a first step towards organising a memorial visit to the spot where HMS Narwhal went down next May.

The mission would involve six Polish and two British divers going down to the wreck while the mens’ relatives cast a wreath onto the waters above from a research vessel on the surface. There are hopes the divers may be able to affix a permanent plaque to the wreck in memory of those whose remains still lie inside...