Seaweed said:
Yes, it was a model of the FX of HMS Nelson .. wonder what happened to it? Perhaps somebody, somewhere is practising with its mooring swivel in his garden shed.
Click to expand...

Nobby, 10/10 for that one mate. I have 3 images of when she was getting scrapped, 1 of her (complete, stripped to the 'protective' deck) in a dock, 1 when the rear half broke away during the towing, and the 3rd is someone with a cutting torch on deck.

But this film gives views or her deck that I've not seen. Well done that man!

That's 3 new bits of film of her, some are just interesting to have but the one on deck shows the fittings.

The red circles the battle damage. I've omited the starboard damage as that would make it a bit confusing. Source: The Admiraltys own damage assessment drawings.

Book Reviewer
Since you ask - the mooring swivel is an x-shaped piece of cable with a swivel at its centre allowing two anchors to be secured to two of its arms and the two cables to the other two arms. This allows the ship to swing round on the tide when she has two anchors down, without the cables getting wrapped round each other ('an elbow of foul hawse'). Lion may have kept hers in a locker somewhere, hiowever with her size of cable it would have been a fairly large thing so may have been secured on deck. It may help you to get hold of a copy of the Admiralty Manual of Seamanship (preferably the oldest edition you can find) as I'm sure other qns will crop up as you work on your model, for instance you will want good diagrams of the davits and their rigging, and of the derricks.

You could also see if you can get hold of any of these videos that feature Hood.
http://website.lineone.net/~rhaywood/nvtc.html
T

Seaweed said:
Since you ask - the mooring swivel is...

It may help you to get hold of a copy of the Admiralty Manual of Seamanship (preferably the oldest edition you can find)
Click to expand...

Cheers Sweedy... I have the 'Seamans Pocket Book 1943', there's a fair amount of useful info in there but at a superficial level... really. Well the book is an introduction to the navy so what do you expect?

I can't say I've ever seen this 'mooring swivel', any images of capital ship I find some tend to have the anchor chain (shackle) taken by boat to a 'buoy' in a mooring. [What's the term for that? The 'Bouys' name? (it's like a big wooden barrel in the river])

Or they'll be off their own 'bower' anchors. [What was the policy for using these? Would 1 side have preference over the other or did they just use the side nearest the direction of current?

LION tended to use a 2nd 'bower' anchor as a 'stream' anchor. I think they were a stockless 'Wasteney-Smith' type but she also had a 'Byers anchor' as a stream anchor for a period. It's just a different design of stockless anchor, eh?

I've seen images of the forecastle teaching aides, there's also one of a mini-battleship [actually, that was a Nelson class iirc]

I'll tell you something else I did't know: all the picket boats (50ft steam picket boat) are numbered and could be swapped around the fleet. I thought they were sent to a ship and that was it... it was hers til whenever. But I get a sense that she carried that particular bot until it maybe needed a full overhaul and they'd send her a replacment that would then stay with her til whenever.

Actually, that seamans book is full of detail about small boats and has answered the few Q's I was going to ask. But it says that the 'life lines' were placed around a hoist boat and back up to the jack-stay. It must be as an extra 'steadier' for the boat hung on the falls in storage. I always thought, and have seen images of, these lifelines being coiled up and hanging freely off the jackstay... or they'd be coiled and tied to the boom between the davits... the only 'steadier' for the boat being 2 flat lengths of something that form an 'x' on the outside of the ship. The ends of these straps going fro davit head to the opposite davits foot and vice versa. Can you/anyone clarify? Ta!

Nobby, can't say how helpful those films have been.. especially the one showing the deck fittings and forecastle area... it's so refreshing to see the actual things for a change.

I can now see I've made the cable holders wrong and far too big. >sigh!<
T

Details in 'ships log'? and the numbering of secondary guns

Hi
Can I ask these here instead of making a new thread for them? thanks.

In a ships log, would details of ship alterations be added? In other words, would they write:

Would it give such detail? or just mention the dockyard visit and time they entered and left?


The numbering of secondary guns:

On LION (and PRINCESS ROYAL) the first gun on either side of the forward shelter deck had a 2nd gun right above it.

On ships, the way to number the guns was the starboard guns had an 'S' prefix and the port a 'P'. They were then numbered from fore to aft beginning with 1. So QUEEN MARY had all her guns from S1 to S8 and P1 to P8 as they were all in one long line (sort of)

Now LIONs had these guns above their S1 and P1. Where in the S and P range would you find these guns? They are directly above S/P1.. same position, just 1 deck higher.

The basic question is how d they number a secondary battery when the guns are placed on different heights?

p.s this image is the 'Y' turret on some capital ship (ROYAL SOVEREIGN) and it shows the '4 turns of towing hawser'. The image is quite big and I originally posted it here but that's a bit unfair for dial-up users, now I've linked to the page it's on. The image is 2nd down.. it's of a line of men holy-stoning the deck under the supervision of a PO.

Anyone know how it was fixed to the deck? I've just seen other images of, co-incidentally ROYAL SOVEREIGN, and it's just coiled round the barbette with the enc of the hawser spliced into an 'eye' and that's just left untide and only held there by whatever is holding the turns of cable against the barbette side.

When I origially fixed this hawser to the deck, I used eyebolts into the deck and shackled these spliced cable ends to the eyebolts. Does that sound right?

The heel of a boom or small davit?

Hey lads, a quickie, what does the heel of a davit/boom look like? There's 3 options and I've reason to think it could be any of them:

1, is it a smaller version of a big davit? Same principle as this but with the heel of a davit ABOVE the 'C' part, not in the middle as depicted here? You can see a small davit heel in the lower left corner. 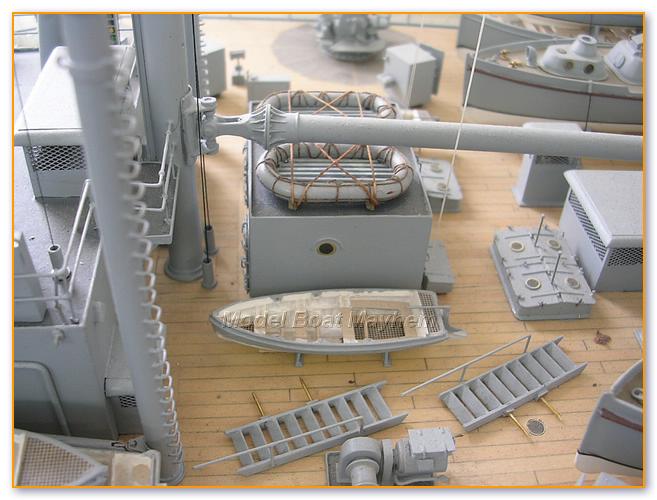 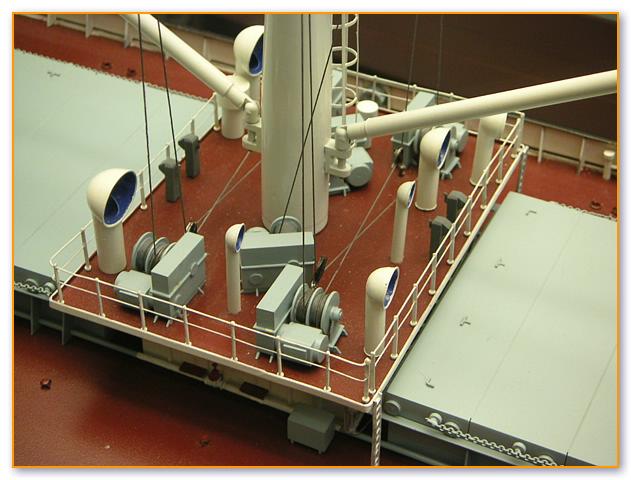 ... or the same arrangment as the above, just a slightly different way of getting there: {the heels is on the left hand side)

2, or is the heel basically a hook shaped like a question mark '?' that fits into a eyebolt or similar on the derrick post/ships side? The torpedo net booms are like this.

3, or is it a ball & socket joint? [a bit like an upside down trailer hitch or maybe the joint where the thigh bone fits against the hip bone]

Which of the 3 is it like? I'm getting hints that it could be any of the above.

Cheers lads, sorry for all the Q's.

I'll look out for that book in the library, scouse. 21man, that link was great... pity it's US but it's all basically the same principles as the RN.

S
Would you help me identify this ship?
2