Book Reviewer
Round about March 1965 an FAA helicopter (Whirlwind?) was lost in Borneo. It was being driven by a Kiwi called Bruce and to my shame I can't remember his surname. I think he must have been RNZN rather than RN. Any FAA RRs got any more on this? He deserves to be remembered.
S

This could be it, dunno.

Book Reviewer
Bruce Brown, that's the chap. Many thanks. RIP all five of them.

Sad site. Rather a long list. And I know too many of them.

14/12/1965 XS497 AS Wessex HU5 848 NAS Crashed inverted after the main engine bearing failed while on approach to Bau, Sarawak, Borneo

Ted Crispin, ex crewie was involved in a fatal helicopter, (Whirlwind), crash in Borneo, he survived but the pilot died. I believe that was 848 NAS.

I have just checked and Ted passed away in 2005 so unable to help - sorry.

Book Reviewer
Thanks chaps, knew you would come up with the details. could find no mention of this in the Times archive and wonder if these losses ever got reported in the press. Times March 31 1965 does have an item and rather blurry pic of 4 carriers on ex FOTEX of Pulau Langkawi (although it doesn't mention the location). On one day of that exercise three aircraft went in in a day with the loss of I think five aircrew. Nothing about that in the Times report. Don't think the Great British Public was much moved by the loss of its servants in those days.

/04/1965 XS151 B-R Wessex HAS1 845 NAS Collided during a turn and crashed into a river at Nanga Gaat, Sarawak. Borneo. Both aircraft were carrying troops and all occupants were killed
12/04/1965 XS154 B-V Wessex HAS1 845 FAA, 845 Sqn, Bulwark, aircraft carrier, based at Nanga Ghat during Borneo campaign, flying two Wessex 1 helicopters, returning from a troop lift, in collision at Nanga Ghat, crashed in river (correction and additional information thanks to David Ackroyd who "saw the collision having landed from a previous mission half an hour earlier")

Also "Fotex 65" in the Andaman sea, Carriers taking part, HMS Eagle, Victorious, Bulwark, HMAS Melbourne, and 36 other ships. Eagle lost a Wessex, with the loss of 2 of the 3 man crew. 24/03/1965 XS123 E-291 Wessex HAS1 820 NAS Ditched into the sea off the Malayan Coast 500 yards off HMS Eagle due to suspected engine failure. The port flotation bag collapsed and the helicopter sank FAA, 820 Squadron, Eagle, helicopter crash in Malaya

Scouse can you remember 'Ted' Crispin?

Thanks for the data, I genuinely thought he ditched in a W/W.

He lost quite a few fingers in that crash. He is the only bloke I know who could empty an airfield of aircrewmen. The call would go out at Portland, Teds just landed on the south side. All the squaron crewmen would suddendly disperse from around the 'uckers' board and find jobs to do. (Normally at home!!!!!!!)

Book Reviewer
Scouse my recollection ( I was on that FOTEX in the London) was that a fixed wing went in and then an RAN Gannet that had gone to look for its crew and then a helicopter that had gone to try and rescue both. So my memory is out of whack with what you find recorded. On balance after 45 years you are more likely to be right!

Book Reviewer
Correction to earlier post, the December 1965 crash was (tersely) in the Times December 15th. Four fatal casualties reported but no names given. Names were reported in the Times next day. Crash reported as at Bau near Kuching.

The FOTEX crash was reported in the Times 27th March 1965 in a news item saying that carrier-borne helicopters had been grounded and also the RAN had done likewise although it had experienced no trouble itself. I can't cut and paste from the Times but anyone with a library card for a subscribing library like Hampshire can get in with their card number (NB login is case sensitive). The Times report gave the names of Clay and Little and also N/A Renshaw from another Eagle Wessex crash.

Re Whirlwinds, an Observer told me that the reason they failed so often was that Pusser had, quite apart from mounting the Alvis Leonides engine at an angle to get it to fit, arranged for the oil to circulate in the opposite direction which all too often it didn't. However one which went in off Portland 1961 or 1962 had a broken tail boom, found by HMS Shoulton which had been brought down from Scotland to search with her experimental minehunting sonar.

Seaweed said:
Scouse my recollection ( I was on that FOTEX in the London) was that a fixed wing went in and then an RAN Gannet that had gone to look for its crew and then a helicopter that had gone to try and rescue both. So my memory is out of whack with what you find recorded. On balance after 45 years you are more likely to be right!
Click to expand...

My Commission book Hms Victorious is my source. :wink: We lost a Sea Vixen after Fotex 21/04/1965 XJ577 V-464 Sea Vixen FAW1 893 NAS Both engines caught fire immediately after a boost launch from HMS Victorious while operating in the East China Sea off Okinawa. The crew ejected but the observer was killed FAA, Victorious, aircraft carrier, flying Sea Vixen, ejected during launch

Sentenashi said:
This could be it, dunno.

Recall this incident, I was serving Ship's Company at the time.
Can't be certain these many years later, but wasn't it a rotor blade detachment ?

Seaweed said:
Re Whirlwinds, an Observer told me that the reason they failed so often was that Pusser had, quite apart from mounting the Alvis Leonides engine at an angle to get it to fit, arranged for the oil to circulate in the opposite direction which all too often it didn't.
Click to expand...

Whirlwind Mk. 7's with the Leonardes Major piston engine suffered massively from valve spring failure. There are many crash sites around Portland/Weymouth that bear testimony to that particular failure.

Several off Chesil Beach, PBL. A few over the mainland too.

I was involved in quite a few salvage operations pre 1970! 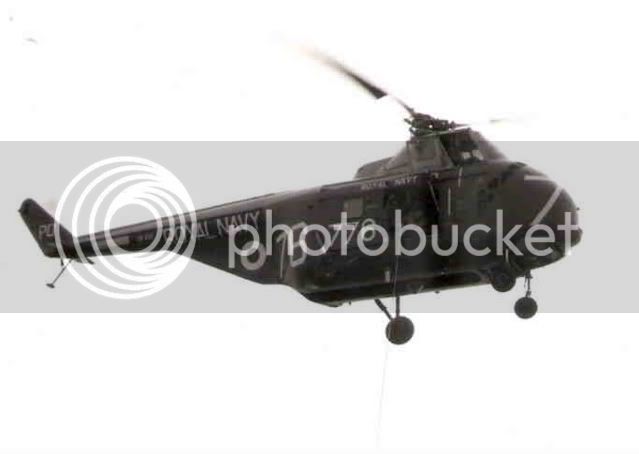 It is lowering our rum keys to us which the Sub had taken ashore in his pocket. Fortunately for him this photo was taken before 1100.

Loved the smell of the Cartridge Start on a cold Lossie Morning :wink:

scouse said:
Loved the smell of the Cartridge Start on a cold Lossie Morning :wink:
Click to expand...

Don't you mean when they started. A hide face hammer was required to shift the diaphram half the time!!!!!

The worst job surely had to be the turning over of the pistons to prevent hydraulicing. Over a hundred turns of the 'starting handle to move the pistons through one and a half turns!!!! Kin job that was. :?

http://www.britishpathe.com/record.php?id=64912
You must log in or register to reply here.

Actions on a Plan

Handy Survival Tips for the wild

Gentlemen and Tarpaulins: "The Journalist’s Guide To Writing About The Royal Navy"