With the exception of a handful of airframes produced by the Japanese and Russians it doesn't appear than any serious work has gone into flying boats since the 1950s.

With the demise of our MPAs, SAR and no carrier borne AEW / tankers I wonder whether it is an idea that could eventually be revised.

Granted we have two big floating decks on the horizon but other than the possible exception of the V22 nothing that could provide tanking, COD or high altitude AEW. Never mind long endurance ASW or SAR.

Apparently those pesky Iranians have revised the idea and deployed a squadron of stealthy ( I'm guessing this means plywood) small flying boats.
F

RE the Iranian WIG thingy. I have followed the Airfish project for many years now: Linky

If the MoD was to go down the flying boat road the R&D costs would be phenominal!!!

If there was one on the shelf you would have to balance its usage against cost and to be honest in a SAR role I dare say it wouldn't be economically viable!

With the exception of a handful of airframes produced by the Japanese and Russians it doesn't appear than any serious work has gone into flying boats since the 1950s.
Click to expand...

And there are plenty of good reasons for that. If the practicality of flying boats was viable then you'd already have fleets of them on the waterways and seas. The best thing about them is the availability of REALLY long runways. That, of course, is if the runway is not too bumpy to take off or land :smile:

Not wishing to sound ignorant but what is the difference between a seaplane and a flying boat?


Sent from my iPhone using The Force

northern-matelot said:
Not wishing to sound ignorant but what is the difference between a seaplane and a flying boat?


Sent from my iPhone using The Force
Click to expand...

Well just to muddy the waters, WIG craft are classed as boats even though they fly using the ... umm .... WIG effect
C

As I understand it the main problem with flying boats was the amount of maintenance they required rather than the conditions they could operate in. Also the availability of long runways in many party of the world was rather sparse, particularly in the Pacific. Once the focus shifted towards nuclear deterrence and the aircraft carrier they were pretty much consigned to the history channel.

Looking at the SeaMaster though performance wise it was pretty much two Buccaneers bolted together so maybe the difference between carrier aircraft and flying boats wasn't as extreme as it appears, in the 1950s at least.

As we lack an indigenous airframe for the roles I mentioned above, and the candidates are rather expensive and lacking in performance there might be a niche for the flying boat yet.

Did the Russian Navy ever order A-40s? Despite being an 80s design they were mooting it as their main ASW platform..

Book Reviewer
Why would anyone want them? The US experimented with all sorts of flying boats in the 50s and none of them proved a success, including the Tradewind which was going to come creaming in from nowhere and disgorge leathernecks on some likely beach. The flying boat heyday for us - the Empire routes - preceded the general availability of runways, and maintenance from a bouncy little boat must have been an absolute pig. One of lour 1940s/50s little failures was the 'Flying Boat Fighter' - adverts showed it creaming upwards from its island base, presumably to defend the island base that would not have been there except to base the flying boat fighter. The performance penalty of the hull did for it as much as anything but you can still see one in the Southampton aviation museum.

As for SAR, given the sea state actually causing some of the disasters from which people need rescuing, it would have to be abn extraordinary flying boat to cope with that role. The US used them to rescue downed flyers in the Pacific in WW2 but they had been downed by the Nips, not by weather.

Surface effect is something else but greatly weather dependent.

Anyway to cheer you up here's a rather grotty copy from a 1937 Illustrated London News showing somebody's idea of a vast flying boat base in Langstone Harbour - that didn't happen.

And here's a nice big flying white elephant for you to take to bed instead of a teddy: 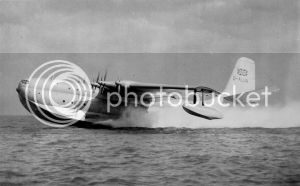 Super Moderator
How about the Russian Surface Effect Craft, it'd get to the incident fast enough (if the sea was flat)

Although not military, there was a plan several years ago to turn the "wash" into a large lake & develop seaplanes for long haul to Canada & America so as to avoid the main airports. Every so often it comes back up in the local press, so it could still come to fruition in the long term intercontinental aviation planning.
Last edited: Apr 2, 2013
C

Quite, not out of nostalgia that's for sure...

We don't lack long runways though increasingly wherever you go they are either in demand or fully utilized. Flying boats tended to carry more weight simply because their runways were practically unlimited.

SAR, effecting a landing to rescue the victims is an option, one which the Japanese have used sporadically. Most likely though would be as a search platform whence Bristow's provide the chopper.

Why else would you want them? Well the Ruskies seem relatively keen on the idea ( though this hasn't translated to serious orders yet) probably due to the ability to land on the water and use a dipping sonar. I have no idea how an SSK would get around this. Also Beriev submitted the A-40 for the MPA2000 competition. The Navy, apparently, loved the idea. The RAF, not so much.

If you could think of another way to get a 30,000 ft 2000nm range AEW platform which could operate, most of the time, in support of our carriers and rather thirsty proposed F35Bs. As a tanker it could dispense 10 tonnes, more than twice what the only likely competitor ( the V-22 ) which is also rather limited conditions wise and hugely expensive.

As for as an MPA we still have the avionics fit from the MRA4, both aircraft are similar sizes. The only realistic alternative, purely as an MPA, would be the P-8, which is also rather pricey.

COfD might be a bit hair raising, but possible.

Last but not least a new design airframe could fulfill all of the roles listed above possibly rather well, rather than expensive and sub optimal solutions like the V-22.