prefer me old one! 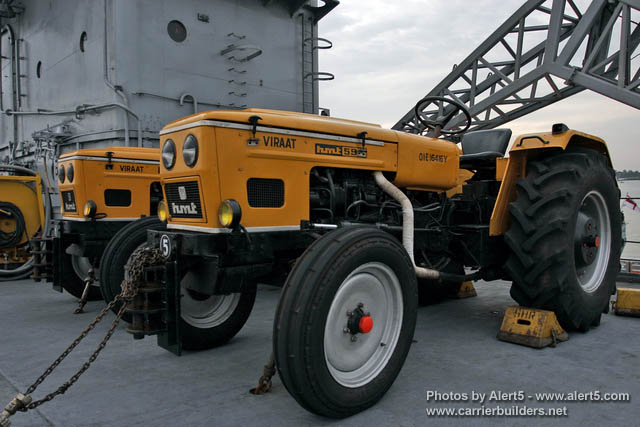 Does what it says on the tin-
they're on the flight deck and they're tractors why spend more!!

Well I wouldn't do 9 spot on one of them

What size airplanes/helos does this ship carry .. :???:

What size airplanes/helos does this ship carry .. :???:
Click to expand...

I'd guess that the ship in question is the Viraat (ex-Hermes) looking at the name on the front of the tractor; from her entry in Wiki she's identified as being able to operate up to 30 Sea Harrier FRS Mk 51, as well as an unspecified amount of Kamov Ka-31 Helix-B aircraft for AEW, Sea King Mk 42B and Ka-28 Helix-A for ASW and Sea King Mk 42C for Commando Assault / VERTREP.
N

Does it come with all the attachments, plough, hoe, spray, seed spreader, no lets not talk mucky.

So that is why Airy Fairies always have a carrot in their gobs and get stationed in Somerset or Corwall.

We had similar ones (Massey Ferguson) when i was on Eagle 1959.

You want to see their new Carrier!Its due to be delivered in 2008,its the Old USSR Admiral Gorshkov.After several years of negotiations, the ship was purchased by India in January 2004. In a deal worth $1.5 billion USD, India gets the ship (reconstructed to their specifications), 16 MiG-29K 'Fulcrum' fighters, 2 MiG-29KUB 'Fulcrum' trainers, 6 Kamov Ka-31 'Helix' ASW/ reconnaissance helicopters, torpedo tubes, pilot training, simulators, and a supply of spare parts.Modifications to the ship included a complete refit; an overhaul of all systems; updated electronics, radars, and communication gear; the removal of all the anti-ship missile tubes from the bow; the installation of three arresting wires on the angle deck; and the fitting of full length flight deck with a 14.3-degree ski ramp at the bow. These modifications will allow the ship to operate the MiG-29s and India's Sea Harrier aircraft.

After training on the MiG-29s in Russia, Indian pilots are undergoing advanced carrier takeoff and landing training at the US Navy's Pensacola facility.

India is performing mid-life upgrades to their remaining 22 Sea Harriers. They have lost 6 in accidents over the last 20 years, and the UK offered to sell 8 replacements when the Royal Navy retired its last Sea Harrier squadron in Oct 2006. However, after inspecting the planes, India decided it would cost too much to upgrade them and passed on the offer.

India is expected to acquire a total of 40-50 Mig-29s, and a number of either BAe Hawk or Boeing/BAe Goshawk trainers.

Fcuk me Andy, I know the Indians can make anything out of metal, but that's taking things a bit too far don't you think?!! :shock:

lOL,apparently they are designing and building their own.for more info take a peek here.

the worst one I ever drove was the Ford 333. I was asked to move an F-111 at prestwick with one, couldn't stop laughing.