FB: "Commandos Master The Art Of Moving Through Arctic Battlefield"

"Commandos have been mastering the art of moving around the battlefield in the deep snow and ice of the frozen Arctic.

Royal Marines of Arbroath-based 45 Commando have just completed the mobility phases of the Cold Weather Warfare Course in northern Norway.

Before moving onto the fighting stages, the commandos have to know how to get into battle and also move around during combat in one of the planet's most unforgiving environments.

Commandos must be able to carry weights of up to 75lbs, pulling pulks (sled) weighing up to 40lb through the snow on skis or snow shoes.

The training includes cross-country ski marches, covering up to 20km a day, alpine skiing and skijoring; where commandos are towed behind a BV all-terrain vehicle for rapid movement across the battlespace.

“Vehicles and helicopters are superb assets in the Arctic but the combination of weather, mechanical breakdown and enemy action require the individual commando to be able to ski and snowshoe with their ‘house on their back’.

“As we move towards a Future Commando Force construct, as commandos it is vital we can be self-reliant in the field.

“The mobility training was made all the more challenging by the harsh environmental conditions – we’re now looking forward to learning the tactical skills on the fight phase of the Cold Weather Course.”

More about the Cold Weather Warfare Course and some cracking photos here: 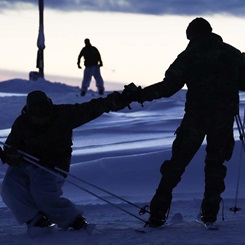 Commandos master the art of moving through Arctic battlefield

Commandos have been mastering the art of moving around the battlefield in the deep snow and ice of the frozen Arctic.

lets sort out our forces