A nuclear submarine was believed to have caught fire in Scotland this afternoon with onlookers fearing smoke was spilling out into the skyline.

One person said: "Folks Submarine seen in the sea off Helensburgh smoke pouring from it six tugs in attendance."

Another said: "Nuclear submarine apparently on fire or at least emitting a lot of smoke near Helensburgh."

Despite the concern from some, the smoke was later confirmed as diesel exhaust.

A contact for the Queen's Harbour Master Clyde, told Express.co.uk that there was no fire during this exercise.

A cold manoeuvre is when the ship is moved without using its own propellers or propulsion.

In fact, the alleged smoke was caused by the diesel engine starting up.

The Ministry of Defence later confirmed: "You may have seen some reports of a submarine on fire on the Clyde.

These are inaccurate. The smoke you can see is from the submarine’s diesel engines and is entirely normal."

Each submarine is equipped with Trident nuclear missiles and is steam-powered.

Although the ships have come under scrutiny due to the weaponry, they also act as the UK's nuclear deterrent.

This comes amid concerns over the growing nature of China's navy, and the potential access to the Arctic.

He said: “Climate change is a concern for all of us, but it is opening up new maritime trade routes across the top of the world, halving the transit time between Europe and Asia. And we sit at the gateway to those routes.

“But when China sails its growing Navy into the Atlantic, which way will it come – the long route, or the short?

“The Royal Navy is constantly on watch around the world. For everyone.

“Because this one remaining stealth medium is also the home to our nuclear deterrent.

“The UK holds that great responsibility as a nuclear state, standing shoulder to shoulder with the rest of the world’s leading powers.

“And it is the Royal Navy that delivers the deterrent, to which this government remains committed: today, tomorrow and for the future."" 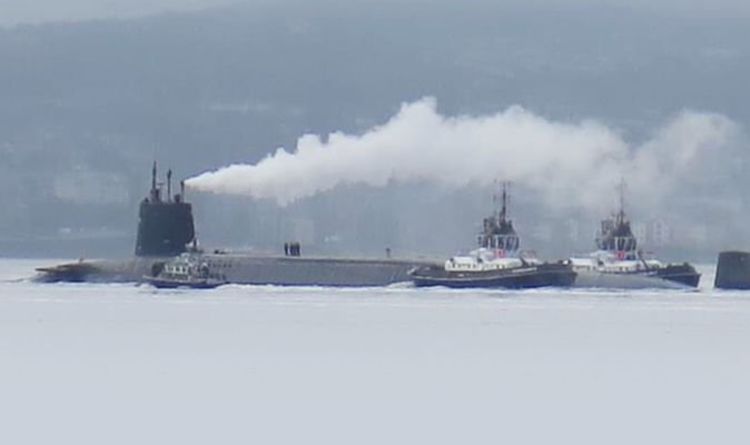 A NUCLEAR submarine was believed to have caught fire in Scotland this afternoon with onlookers fearing smoke was spilling out into the skyline.

S. Echo: "Nuclear Submarines To Be Based In Sunderland If Scots Win Independence"