Sorry it's from the Wail, but hey, no smoke without fire! Might even be based on truth!


[h=1]£21K-a-day David Miliband exploits tax loophole that his Government pledged to close[/h]David Miliband is channelling his earnings of up to £21,000 a day through a controversial tax loophole his own Government vowed to close.
The former Foreign Secretary uses an ‘income-shifting’ device that was condemned by Gordon Brown’s administration.
Last night Tory MPs accused Mr Miliband of hypocrisy for taking advantage of the tax-avoidance measure.
Rather than paying income tax on his non-parliamentary earnings, Mr Miliband pays the money into a company where shares are split 50-50 between himself and his wife Louise Shackleton.
Mr Miliband recently pocketed more than £21,000 a day for work in the United Arab Emirates. His rate of pay even outstrips controversial Royal Bank of Scotland boss Stephen Hester, who earns just under £6,000 a day in salary and bonus.
Mr Miliband’s latest entry in the Commons Register of Members’ Interests shows that he received £64,475 from the UAE Ministry of Foreign Affairs.
He was also provided with transport and accommodation for himself and an accompanying member of staff worth £4,935 for joining the ‘advisory board’ at the ‘Sir Bani Yas Forum’ in Abu Dhabi last November.
The confidential forum lasted just three days. The event was described as a ‘high-level retreat’ that ‘created a space for action-oriented discussions among leading policy and opinion-makers about critical issues for peace and security in the Middle East’.
Last week The Mail on Sunday revealed Mr Miliband is also working for a Pakistan-based City firm backed by a Swiss aristocratic playboy.
It has now emerged that he will do just five days’ work a year for the firm, Indus Basin Holdings, in return for a £50,000-a-year salary.
Mr Miliband’s burgeoning post-ministerial income is siphoned into the company owned with his wife, called The Office Of David Miliband Limited. 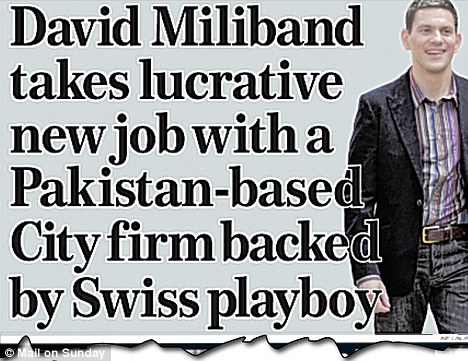 High earner: How the Mail on Sunday reported on Miliband's lucrative new job

Financial analysts say the tactic is usually deployed to reduce a joint tax bill by taking income in the form of share dividends and exploiting both partners’ tax-free allowances.
But the loophole was the target of a campaign by HM Revenue & Customs during the last Labour Government.
One married couple, Geoff and Diana Jones, who had split their Arctic Systems consultancy between them, were pursued by HMRC through the courts but won their fight to keep the perk when they were backed by the House of Lords in 2007.
Furious officials at the Treasury, then run by Chancellor Alistair Darling, released a statement saying: ‘This case has brought to light the need for the Government to ensure that there is greater clarity in the law regarding the tax treatment of arrangements used by some taxpayers to achieve an unfair advantage.
‘The Government will therefore bring forward proposals for changes to legislation.’ No such change to the law has yet been introduced. One senior accountant, who estimates that Mr Miliband’s annual tax saving runs into six figures, was highly critical of the former Cabinet Minister’s actions. ‘Miliband was part of a government that hounded couples through the courts for doing exactly what he is doing,’ the accountant said. ‘It will strike my clients as a bit rich, to say the least.’
Mr Miliband was joined at the ‘Sir Bani Yas Forum’ in Abu Dhabi by his former political patron, Tony Blair, whose own earnings now surpass £12 million a year. 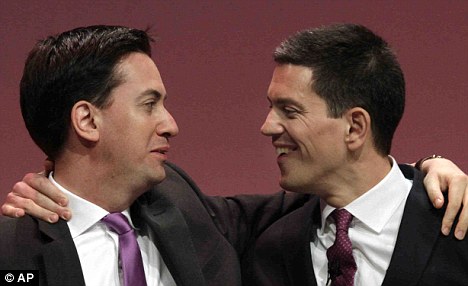 The forum was held on Sir Bani Yas island, a luxurious desert island resort created in the Eighties by UAE founder Sheikh Zayed bin Sultan Al Nahyan, who spent billions of pounds transforming the island into a forest and animal park.
More than 3.5 million trees and 60,000 animals were shipped to the island in 1985, following ten years of construction work. And nine million gallons of desalinated water are reported to be pumped to the island each day.
Last night Tory MP Charlie Elphicke MP was critical of Mr Miliband and his brother Ed.
He said: ‘Usually when spouses own shares it is to help avoid tax. Ed Miliband and Labour talk tough on tax-avoidance except when it’s in the family. You can’t trust a thing they say.’
A spokesman for David Miliband declined to comment on his tax affairs. He confirmed that the former Cabinet Minister would be working ‘about five days a year’ for Indus Basin Holdings, adding: ‘That is about in line with the amount he earns for his speeches.’

So, having read and inwardly digested, any comments?

Book Reviewer
That's what joining the Labour Party is FOR.

SONAR-BENDER said:
Sorry it's from the Wail, but hey, no smoke without fire! Might even be based on truth!
Click to expand...

Nice juicy piece of Fink-bait SB, but remember that:

1. Finks has a lower opinion of the Mail and it's output than even RR has of him.

2. He also employs rather selective targetting with more blind spots than Blind Pugh ever had.

3. Finks would probably admire Milliband for his very similar philosophy of prudence/blow-you-lot-I'm-inboard.

4. Milliband is not (yet) Royalty.

1. Anyone can have a self employed source of income.
2. His accountant would have suggested/set up this arrangement.
3. He can't have much to do in the 'day job'
4. All politicians are hypocrites (Nothing new there)
A

Silence from the Fink-meister about (probably) the next leader of Uber-New Labour. Strange...

Just managed to escape the supper party. Miliband is a politician, am I surprised at this revelation, no I am not.

BOOTWU, No 1 hurt.
You must log in or register to reply here.

Similar threads
Spouse community, especially when away
Speech: "You don't recruit an arsonist to put out a fire. You especially don't do that when the fire is one they caused."
RT Test and Psychometric Questions (Especially Mechanical Comprehension)
NSFW! Especially for Ron Jeremy
Finks PM's me?
Finks Uncle in dubious tax scam
Will they Never Learn (Finks Special)
Ms Moran Vs. Finks, the Taxpayer
The Scotsman (Is this Finks?)
Finks's Mother in Law Nails Clegg
Care to Comment on this one Finks
A new prayer for Finks
Share:
Facebook Twitter Reddit Pinterest Tumblr WhatsApp Email Share Link