I had a few beers last night and when I woke this morning all I can remember is dancing like a lunatic with a beautiful woman aged about 30. However, not only do I seem to have lost my small rucksack (diary, bottle of rum, books, berghaus fleece, etc) but I also have a bus ticket timed at 23:54 from the railway station which is about 4 miles in the opposite direction to where I live. I have just noticed that I seem to have spent all my money as well.
I would like to invite RumRats to use their powers of deduction (Yes. Chieftiff, it's powers of 'induction', really ) and come up with a possible explanation as to what the ferk happened to me last night.
Cheers,
Harry :thumright:

PS I think I may have fallen in love :dwarf:

This causes amnesia and , given time, may be cured ccasion9:
N

Got on train going opposite direction, woke up realised mistake, no more trains so caught bus leaving rucksack on train or bus.

I reckon you sniffed the barmaids apron a few too many times then ended up dancing and frolicking with her 15 year old daughter, who you will subsequently claim in your defence looked and told you she was 30. ^_^;

Having done the deed and realising the serious nature of your criminality you gave all your money to said young lady in a bid to buy her silence.

You then devised a cunning plan to escape via the rail network but when you got to the station it was too late; the place was crawling with BTP officers looking for you because said young lady was severly disappointed with your sexual performance and had already reported the matter, including the description of your incredibly small and disfigured manhood.

Needing to flee from the Police, you boarded the nearest bus in your continued bid to escape. Whilst on the bus you realised she may have described your trendy old mans clothing so needed to rid yourself of your fleece and rucksack, but this is to be your undoing !

You threw your rucksack in the swollen river hoping it will float away and sink your sins downstream, never to be found again. You did this in the knowledge that your rucksack held your diary containing all the chat up lines you use to try and trap members of the opposite species, many of which said youngster has reported to the police along with the bottle of rum which will contain trace elements of your DNA, as will your fleece because you used this to wipe your knob after the event.

Be warned, your rucksack and contents have surfaced and you are currently being hunted and SPB who is currently on his way round with the boys ! :thumright:

By the way, it's not love, it's drunken lust

Any Stains we should be aware of?

Did you have any hair between your teeth this morning?

Any soiled underwear in your pockets?

If we knew the Bus Company we could check for any incriminating CCTV Footage and get it on U Toob.

Fabian of the Foot (Never quite made it to the yard)

Brilliant explanations, lads, I knew you wouldn't let me down. ... Ah, the voices of experience :w00t:
Off out again for round two. Wish me luck :thumright:

Sounds like an E&E ex followed by a bout of TQ by a beautiful blonde Lou. Watch out for ze Germans!!

You were absolutley Shitfaced, took the train to her place, you konked out and she made off with your rucksack and put you in a taxi and convinced you you slept with her. Busted

And knicked most of your cash, this is not the voice of experience that is just what I would do if I was a bird.

You trapped the 30-year-old and went back to her place for some fun. After a bit of tonsil tennis and a grope of her funbags, you moved in for the kill. Imagine your surprise when you found the toggle and two.

After you had stopped gagging, you legged it leaving your rucksack and fleece behind. In your panic to escape you got on a bus going the wrong way. You spent all the money on a taxi to get home.

Now is that the voice of experience?

Proud_2_B_RN said:
Now is that the voice of experience?
Click to expand...

Harry, INTERPOL have just issued an international alert, with your photo on it...

Posing as male, chatted up 90 something gronk

Do not approach - his diminished manhood might be infectious

Reward for information leading to his apprehention

Come on be honest, you were pissed had sex with a Kaitai left your rucksack in the pub, found the bus ticket in the gutter :thumright:
N

Harry I have just found a photo of you last night on the Web. 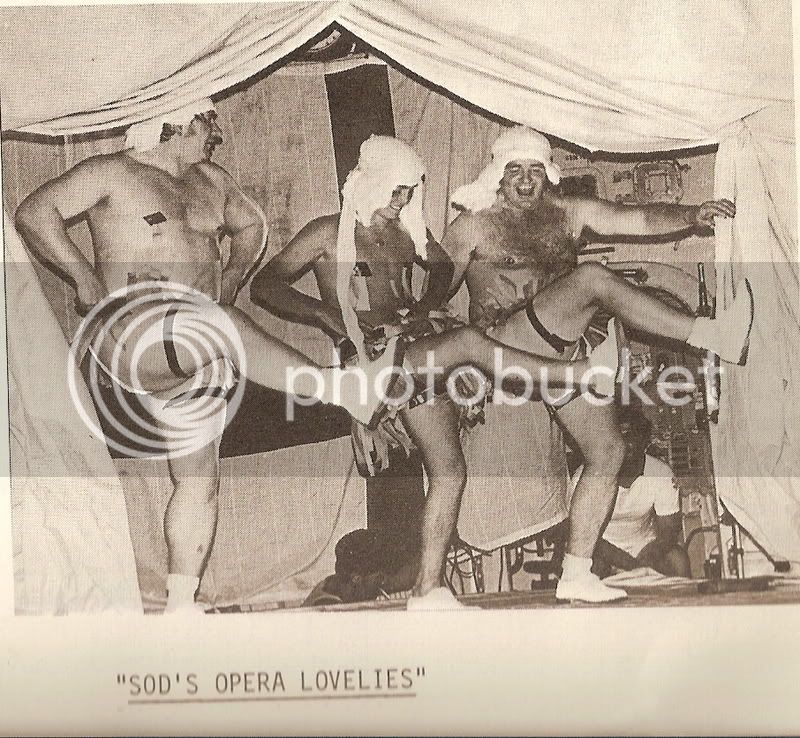 Any strange tingling sensations when you pee yet?

Nicks said:
Harry I have just found a photo of you last night on the Web.

Nicks, where did you get that piccy of the Lord Chief Justice and his colleagues? Their wigs obviously need repinning. Hairpins for loan anyone? :lol:
M

Living/working in Singapore just now on an offshore oil and gas project your storey sounds only too familiar.

If you were here, the storey is simple - meet the boys for a meal, drink, drink, until too late to eat and then a quick visit (just one for the road of course) to Orchard Towers.

I do note note however that your location is Ipswich so the above explanation is probably a bit off. The train ticket bit is a bit confusing I have to admit unless you indented to accompy a lovely young sheep you met to market the next day.

Can anyone help, ... was trying to have a good night out last night, when this mad lunatic jerk of a man kept trying to dance with me. He left his ruck sack. I have spent all day trying to contact the owner. The diary, although phoning a few of the numbers, all the women who answered insisted that they had Definately not know the owner. The fleece absolutely stank and the books, well he has only finished colouring the one.

He said something about having to leave before midnight.

nicked!! lol good one saph
You must log in or register to reply here.

N
The day I thought I had been raped

P
What Is A Matelot
2