Chinese take away anyone?

Looks like a load of old cock to me!
B

A bit hard to swallow.

chewy too i shouldnt wonder.
B

Perfect for the lunch box.

I've been told to lower my salty food intake. fraid i'll sick to a curry instead

You want dick and dips?LOL
B

Can I have it super sized?

Bet after a couple of hours you are hungry again!

Its no wonder they have buck teeth and slitty eyes!!!!

A delicacy at last for AAC

i've heard of people making a dogs dinner out of things but that takes the cake!

hig wrote: A delicacy at last for AAC

... who is remarkably quiet! Maybe he's out buying plane tickets!

Having worked in China for several years I can vouch for story. At one location we were served with what the interpreter described as Donkeys treasure, as the donkey only had one of these it transpired to be the donkeys dickey. As an ambassador for both my company and the UK I tried the said delicacy which had been thinly sliced across the member. The taste was not unpleasant but it was extremely chewy. I tried many unusual items in China and tis said that any animal who's back faces the sun may be eaten by the Chinese
A

higthepig said:
A delicacy at last for AAC
Click to expand... 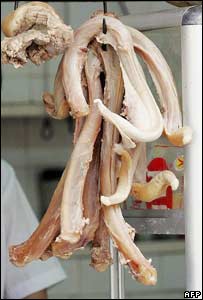