"A visit to Simon’s Town is not complete without marveling at a statue of one of the area’s most famous residents, Just Nuisance. From travelling all across the Cape to becoming a member of the Royal Navy, this is the story of an extraordinary hound.

The Great Dane was born on April 1, 1937 in Rondebosch. As a pup, he was sold to owner Benjamin Chaney, who moved to Simon’s Town to run the United Services Institute (USI). Many Royal Navy sailors frequented the USI as they headed the Simon’s Town Naval Base at the time. Just Nuisance became very popular among these sailors, who would often feed him treats and take him for walks.

Just Nuisance could reportedly spot a sailor by his uniform and would often follow them around. His interest in the sailors would take him far, as he would follow them aboard their ships. The HMS Neptune was his preferred vessel. According to legend, he would lie on the deck on the brow at the top of the gangplank, essentially blocking anyone’s path. This caused sailors to curse the dog, saying, “You’re just a nuisance, why do you have to lie here of all places?!” And thus, his name was born.

No longer satisfied with his familiar streets, Just Nuisance began travelling far and wide. He would often follow sailors onto trains when they went for a “run-ashore” to Cape Town. He became a regular, traversing the trains like an expert. Even when ticket conductors forced him out, Just Nuisance would simply hop from one train station to the next to return home.

His travels angered ticket conductors, who sent demands to owner Chaney to either keep Just Nuisance off the trains, pay his fares or get rid of the dog. The conductors threatened to put him down if he persisted with his antics. Of course, Just Nuisance’s friends and fans objected. Many wrote letters in to the Royal Navy Commander-in-chief to urge them to take action. The solution? He enrolled Just Nuisance in the Navy!

On August 25, 1939, Just Nuisance became an official member of the Royal Navy, making him the only dog to ever do so. As with any other member, he had a host of benefits that came with the title. He slept on the sailors’ beds, attended parades and had a free train pass. He was soon promoted from ‘Ordinary Seaman’ to ‘Able Seaman’ for his valiant efforts.

His presence acted as a great morale boost for the sailors during WWII.

He was quite the brave dog, often breaking up fights between sailors by standing up on his hind legs and pushing his huge paws against their chests. He would also chaperone drunk sailors on the train to make sure they made their way home safely.

Just Nuisance became a married man when he said ‘I do’ to Adinda, another great dane. The pretty pair had five pups together, two of which were auctioned off in Cape Town to raise funds for the war effort.

Living up to his name, Just Nuisance had quite the wrap sheet. He incurred infractions for sleeping in a Petty Officer’s bed, losing his collar, and refusing to leave a pub at closing time.

In 1944, Just Nuisance was discharged from the Navy after a motor accident left him with thrombosis which was slowly paralysing him. His condition worsened, and he was put down on April 1, 1944, to end his pain.

On his last day, which was also his seventh birthday, Just Nuisance went on his last ride to the Simon’s Town Naval Hospital. His body was draped with the Royal Naval White Ensign and he was buried with full military honours at Klaver Camp on top of Red Hill where the South African Navy Signal School now sits. His final farewell included a firing party of Royal Marines and a bugler. A granite gravestone on Red Hill was erected in his honour.

Today, Just Nuisance’s legacy lives on. Locals and tourists often visit Simon’s Town to learn about his story. A statue stands proud in Jubilee Square, and the Simon’s Town Museum has a dedicated exhibition in his memory that feature his official papers, his collar and various images.

Since 2000, there has been an annual “Just Nuisance Commemoration Day Parade” in Simon’s Town main road. During the parade, Great Danes show off in the hopes of being crowned Just Nuisance’s lookalike." 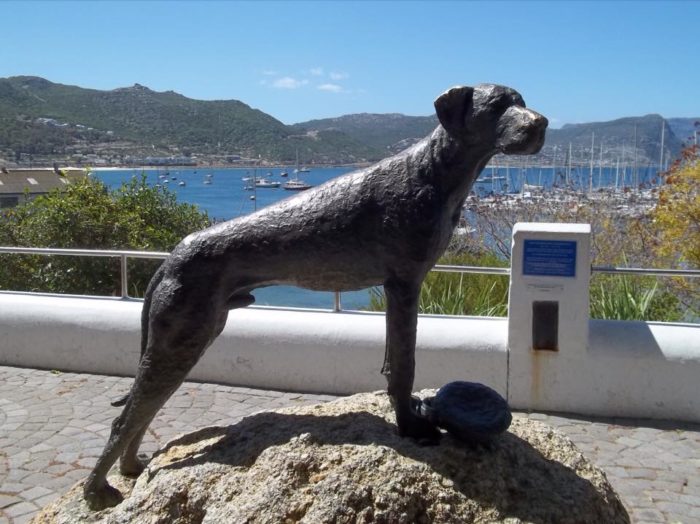 The legendary tale of Just Nuisance

A visit to Simons Town is not complete without marveling at a statue of one of the area's most famous residents, Just Nuisance. From travelling all across the Cape to becoming a member of the Royal Navy, this is the story of Just Nuisance.
www.capetownetc.com

I have a very old original copy of the book. It is a very thin paperback.

I visited Simonstown in 70 on the Oberon and no-one mentioned nuisance or his statue.

fishhead said:
I visited Simonstown in 70 on the Oberon and no-one mentioned nuisance or his statue.
Click to expand...

^Aye, and worth a picture of that book -