Ministry of Defence said:
The Prince of Wales, who is Colonel of the Welsh Guards, visited the battalion at Cavalry Barracks in Hounslow to present Operational Service Medals and meet battalion members and their families.
Some 350 members of 1st Battalion Welsh Guards lined up on parade to be greeted by their Colonel, who welcomed them home and congratulated them on their achievements on Operation HERRICK.
The battalion served in Afghanistan from March to October 2012, carrying out a range of duties in various locations.
During his visit, the Prince also presented Elizabeth Crosses in a private ceremony to the families of those killed in Afghanistan. Tragically, 3 members of the battalion were killed in action, as well as 2 attached personnel, one of them from the RAF.
Thanking the Prince for his close interest in the battalion and taking the time to visit them, Commanding Officer Lieutenant Colonel Dino Bossi said: 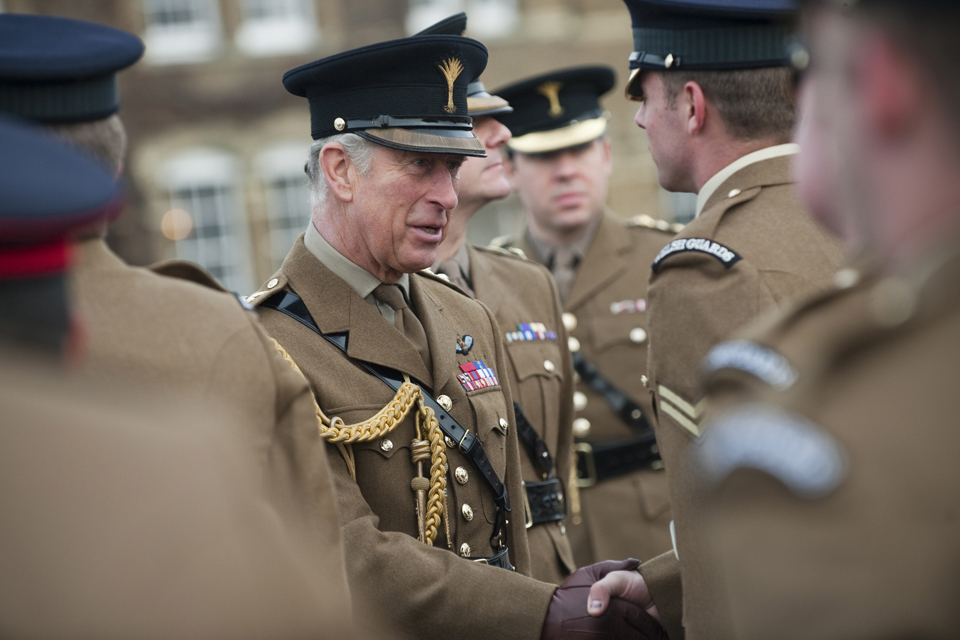 His Royal Highness The Prince of Wales welcomes home members of the 1st Battalion Welsh Guards from their recent tour of Afghanistan [Picture: Sergeant Adrian Harlen, Crown Copyright/MOD 2012]
We are enormously pleased and proud to have our Colonel, His Royal Highness The Prince of Wales, with us today to present the hard-won Afghanistan medals to the battalion.
​
We are very fortunate to maintain such close links with His Royal Highness and grateful for the support and assistance he was able to give us while we were away, especially his care and attention towards our bereaved families and those of us who were wounded in action.
​
Today is a fitting culmination to our HERRICK 16 experience and one that will be remembered by the battalion and our families for many years to come.
​
Last Thursday’s medal parade followed a ‘welcome home’ reception 2 days before when, following a march through Hounslow, the battalion was hosted by the London Borough of Hounslow, led by the Leader of the Council, Councillor Jagdish Sharma. The battalion has also recently exercised their Freedom of Cardiff.

Don't even have to fire a shot, just sing "Men of Harlech" at the enemy.:blowkiss:


Well it worked with the Zulus! (If you believe Stanley Baker)