Ministry of Defence said:
The medal parade was the last in a series of events marking the end off the Regiment’s deployment to Afghanistan.
The Colonel of the Regiment, Major General Andrew Stewart, presented the campaign medals to the soldiers who have conducted homecoming parades in recent weeks in Barnsley, Newcastle and Dereham.
Nicknamed ‘England’s Northern Cavalry’ this was the Regiment’s fourth tour of Afghanistan, having had Squadrons deployed in 2006, 2007 and 2009. Although a very successful tour, it was not without sacrifice and The Light Dragoons will always remember all those who died including Sergeant Lee Davidson who was Killed in Action on 9 September.
The Light Dragoons have undertaken a number of different roles in Afghanistan. The soldiers from A Squadron acted as the eyes and ears of the Brigade. They also provided route security for convoys.
D Squadron delivered training and mentoring support to the Afghan National Police Force and were later augmented by members of A Squadron. 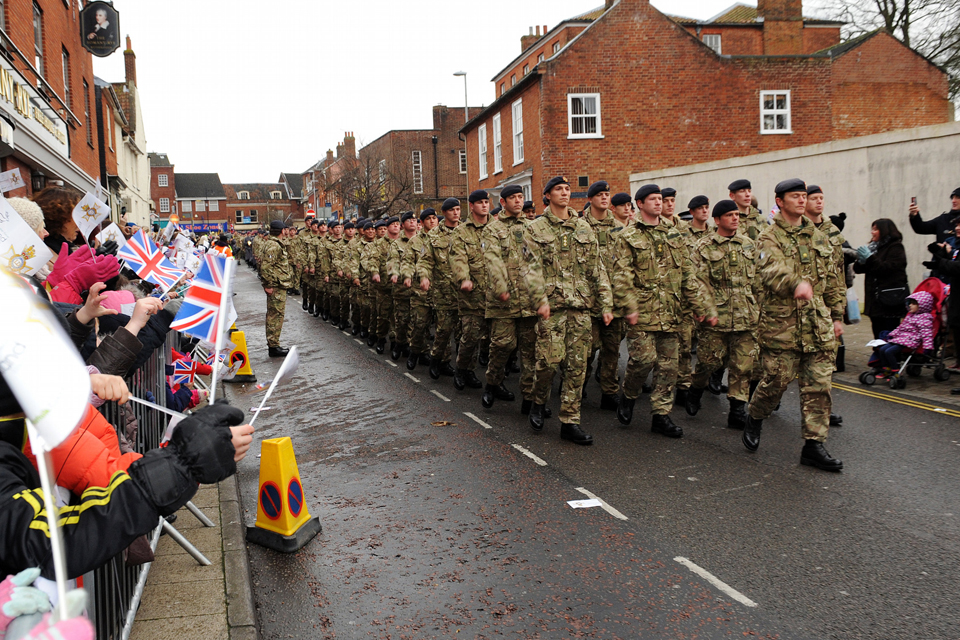 The streets of Dereham came to a standstill on Wednesday 5 December as residents and businesses welcomed members of The Light Dragoons home from Afghanistan [Picture: Corporal Obi Igbo, Crown Copyright/MOD 2012]Their fellow Light Dragoons sister unit, B Squadron, were The Brigade Reconnaissance Force (BRF) who acted on military intelligence to remove key insurgency equipment and personnel from the area of operations.
Trooper Phil Burt and Sergeant Richardson who were part of the BRF discovered a 50 calibre machine gun during one of their operations. Sgt Richardson said:

We were preparing to clear a series of compounds when we saw a disturbance on the ground. The machine gun, nicknamed a Sushka, was covered with a sheet in a trench. It had been well maintained and had a box of ammo with it, so for us it was a great find.
​
During their six-month tour The Light Dragoons carried out some 248 operations, searched 1,700 Afghan compounds and discovered over three tonnes of Homemade Explosives and significant quantities of other bomb making equipment.
Here in the UK, C Squadron was the Rear Operations Group, ensuring that the families remaining behind were given the very best welfare support and ensuring that individual soldiers were fully prepared to deploy if needed. 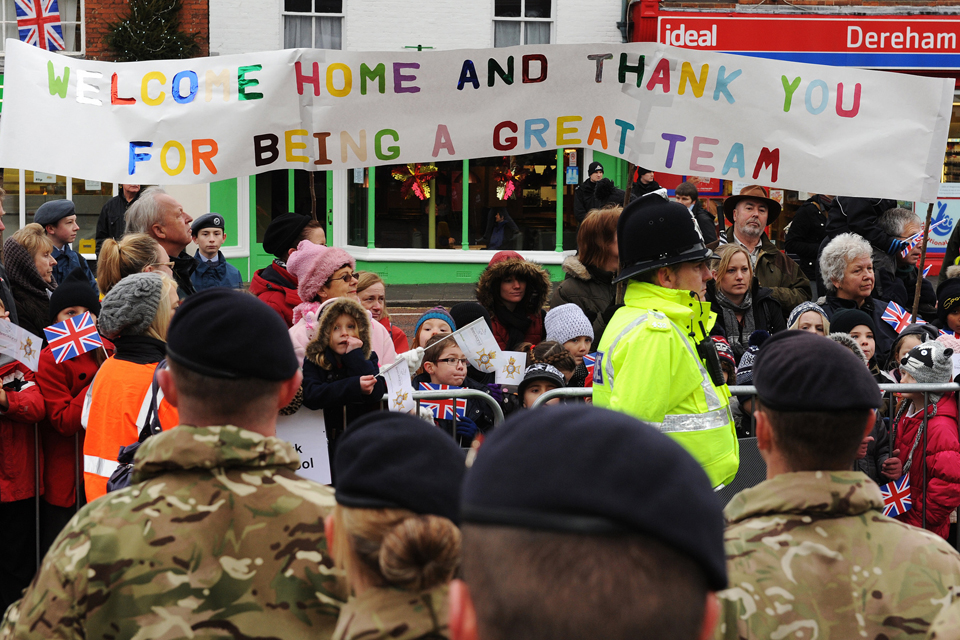 Large crowds, including family and friends of many of those marching, lined the route [Picture: Corporal Obi Igbo, Crown Copyright/MOD 2012]Earlier in the week the Regiment brought Central Norfolk to a standstill when thousands of people gathered on the streets of Dereham to welcome them home.
Shops closed and business came to a stand still as crowds, six people deep in places, waved flags and cheered as the proud soldiers marched through the streets. The Light Dragoons have been based in Swanton Morley near Dereham for the past 12 years.
Following the parade the Regiment attended a thanksgiving service at St Nicholas Church. Trooper Craig Hoe from Hull said:

We have had wonderful support at all of our homecoming parades. It’s great to know we have such support from the local community here where we are based and also back home in our recruiting areas.
​
The medal parade was also great; it has to the next best thing after my Pass Off Parade. I’m now looking forward to having some time off and enjoying some of my mam’s cooking. I’ve really missed that.
​

Wouldn't they look smarter\better by carrying arms? The ones that go bang type as opposed to the things that dangle from my shoulders
You must log in or register to reply here.