Ministry of Defence said:
Audacious is the fourth of 7 Astute Class submarines being built for the Royal Navy. They are the most technologically-advanced the Royal Navy has ever sent to sea and offer a step-change in capability.
The contract with BAE Systems will safeguard 3,000 skilled jobs at Barrow-in-Furness in Cumbria and represents a significant step forward in the Astute submarine programme.
The first 2 boats, Astute and Ambush, are currently undergoing sea trials to rigorously test their systems. Astute has conducted deep dive trials and successfully fired Tomahawk land attack missiles and Spearfish torpedoes.
Ambush’s ability to dive and surface has been successfully tested, as has her propulsion system, and the third boat, Artful, is reaching the final stages of her construction at Barrow shipyard.
The MOD can also confirm today that a further £1.5 billion has been committed to the remaining 3 submarines in the class. This has enabled early build work to start on the next boat (Anson) and long lead items to be ordered and bought for the as yet unnamed boats six and seven.
Defence Secretary Philip Hammond said:

This £1.2 billion contract marks an important step forward in the progress of the Astute programme and moves the Royal Navy closer to adding more of these highly advanced and powerful attack submarines to its fleet.
​
I am also pleased to announce today that the MOD is committing more than £1.5 billion for boats five, six and seven.
​ 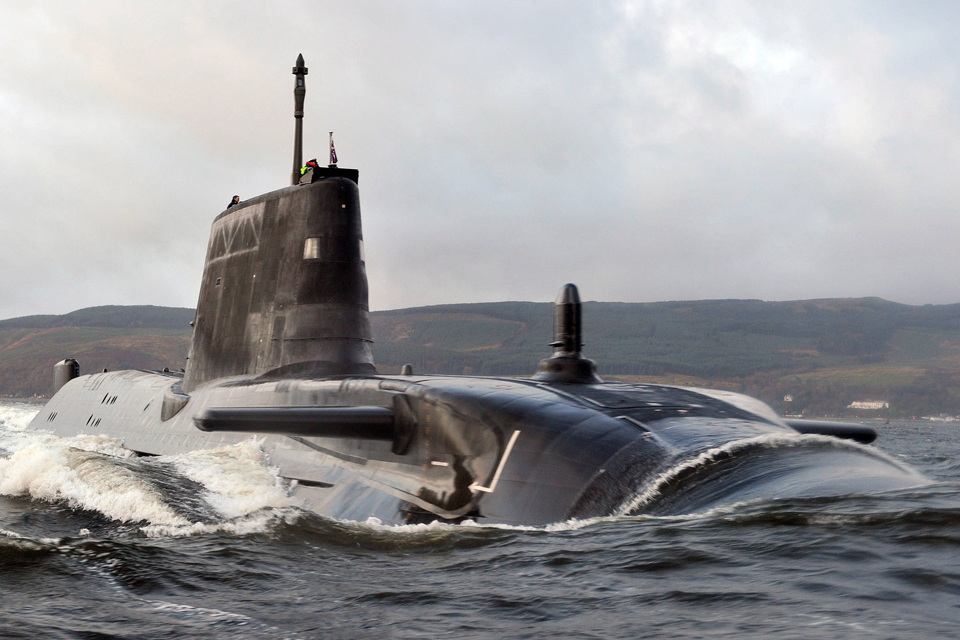 HMS Astute sails up the Clyde estuary (library image) [Picture: Leading Airman (Photographer) J J Massey, Crown Copyright/MOD 2009]
This funding demonstrates our commitment not only to a key Royal Navy capability but also to the submarine industry in Barrow which will play a vital role in Astute for decades to come.
​
Rear Admiral Simon Lister, MOD’s Director of Submarines, said:

The Astute Class will become the jewel in the crown of the Royal Navy’s Submarine Service and boasts much greater firepower and more advanced sonar and communications than ever before.
​
These submarines represent a huge leap forward in technology and will operate all over the world with the Royal Navy. These boats provide the optimum capability a submarine can offer in land strike, strategic intelligence-gathering, anti-submarine and surface ship warfare, and protection of the strategic deterrent.
​
Featuring the latest nuclear-powered technology, the Astute Class never need to be refuelled and can circumnavigate the world submerged, manufacturing the crew’s oxygen from seawater as they go.
The 7,400-tonne Astute Class are quieter than older submarines, and can operate covertly and remain undetected despite being 50% bigger than the Royal Navy’s current Trafalgar Class submarines.