I am looking for a war diary or similar document of the 1st Submarine Flotilla in WW2.I am also looking for a listing of staff officers attached to the flotilla during this period.Can any of you help please?
L

I should imagine that the Navy List for the war years would give a list of SM 1 staff officers, depending on it's base at the time.
Also, you could try the RN Submarine Museum at Gosport, or the Naval Historical Branch.
If you have a particular interest in a specific boat, let me know and I'll see if any of the patrol reports are held at Kew.

The names of officers appointed to the 1st S/M Flotilla should appear in the Navy Lists covering the period. Copies of these are held by Naval Historical Branch and the RN Museum Library, both located in Portsmouth Naval Base. See here for contact information.

Thank you both for your speedy replies.I am thinking about going to Kew next week to look at the logs of Pandora and Turbulent for this period,so if I have any time remaining I will try and have a look at the sources you suggest.

I think I might have a pic of the Pandora I aquired some years ago.If I find it you are very welcome to it.

Looking forward to seeing it Rod.

For what it's worth:
[align=center] 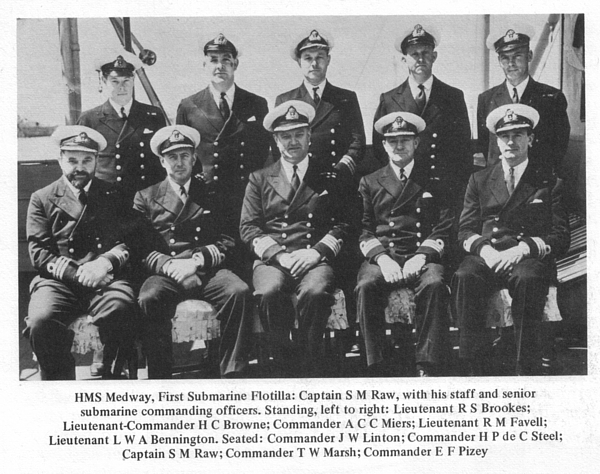 When you say attached to the 1st submarine squadron do you mean to specific boats or what.
I have some COs of the boats in the squadron. But I will need to know boats as my data base doesn't necessarily specify boats attached to squadrons.
Hope that would help.

Naval_Gazer said:
For what it's worth:
[align=center]

Interesting phot as it has 2 VC winners in it. Miers (Torbay) and Linton (Turbulent). Spookily I served on their modern counterparts.
You must log in or register to reply here.