The official blurb:
Lieutenant-Colonel Sharpe is a man with a reputation. Born in the gutter, raised a foundling, he joined the army twenty-one years ago, and it’s been his home ever since. He’s a loose cannon, but his unconventional methods make him a valuable weapon.

So when, the dust still settling after the Battle of Waterloo, the Duke of Wellington needs a favour, he turns to Sharpe. For Wellington knows that the end of one war is only the beginning of another. Napoleon's army may be defeated, but another enemy lies waiting in the shadows – a secretive group of fanatical revolutionaries hell-bent on revenge.

Sharpe is dispatched to a new battleground: the maze of Paris streets where lines blur between friend and foe. And in search of a spy, he will have to defeat a lethal assassin determined to kill his target or die trying ... 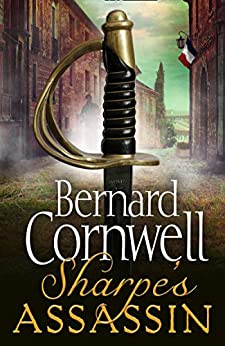 Confession time- I'm a big Sharpe and Bernard Cornwell fan so this review may be biased:

This book finds Sharpe and Harper surviving the Battle of Waterloo, where the post battle carnage is described in graphic detail by the author. Sharpe is busy sorting out his decimated regiment when he gets a call from the Duke of Wellington, despite rising to the rank of Lt Col, Sharpe remains the Iron Duke's favourite 'shitty job officer'.

His new tasking takes him into the grimy world of Paris hunting down the perpetrators of a plot to destroy the newly won peace.

All the usual elements of a Sharpe novel are present i.e. dodgy aristocracy, inept officers, loyal riflemen, appearances of characters from his past and plot twists aplenty but for once, as Sharpe is now living on a farm in Normandy with a posh French woman, he doesn't bed any other women!
The story is fast paced and based around historical events which have been meticulously researched.

Another enjoyable read for Sharpe fans reaching the usual high standards set by Bernard Cornwell
I hope I'm not the only one who visualises Sharpe talking like Sean Bean when I read the books?
Huzzah!!!