One of the benefits of being a book reviewer is that you get to learn lots of things, often from unexpected sources. I selected this book not dreaming what it would do to my current knowledge and understanding of the Middle East and of Anglo-American relations.

As a child of the 50s and 60s my only formal history knowledge comes from O levels that covered Europe up to the end of World War One. My knowledge of more recent history has been picked up from my parents, newspapers and generally as I went along. This book challenged a lot of what I thought I knew, indeed showing that much was simply wrong.

This is a heavy book, both physically and by way of content: 400 plus pages, it covers the post war year’s events in the Middle East predominantly (but not exclusively) the relationship between the UK and the US.

Proving that fact is often stranger than fiction, the book reads like a Frederick Forsyth spy thriller: everyone has an ulterior motive for their actions. The book shows the UK/US ‘special’ relationship for the facade it was. The US didn’t trust us and we certainly didn’t trust them. Considering we had been such close allies during the war, it seems almost inconceivable that we spent many of the post war years spying on each other and generally distrusting each other’s actions.

My late father always said, “Never trust an Arab and you’ll not go far wrong.” This book demonstrates that whilst it might be unwise to take Arabs at face value, the Brits and the Yanks have the capability to be incredibly subversive and duplicitous.

Of course, the squabble was really about oil, and both the UK and US profited to almost obscene levels whilst keeping the Arabs’ share of any deal down. Both needed to guarantee a continuous flow of oil for their industries and their rapidly growing band of motorists, so they could collect heavy tax revenues back home. I actually found it surprising how valuable oil revenues were to the treasury just after the war.

The US also interfered with many UK operations in the region, (for example when the UK seized control of the Suez Canal) because they were desperately trying to keep Egypt on side from the Russian bogeyman in the growing cold war. But despite their interference in our operations they needed us to stay in the region because they “did not want to be [seen as] the only country killing coloured people on their own soil” in the Middle East.

A lot of the content of this book comes from recently declassified UK government documents, but there are many thousands more documents that are still classified: perhaps we can expect more revelations at a later date?

A thoroughly engrossing read, but one that I found required deep contemplation as the book progressed. There were many players that I found myself investigating on the internet and this took up quite a lot of time. This isn’t the type of book I could comfortably read whilst trying to relax with a good single malt, it demanded a lot of attention.

I’m going to run to 4 ½ anchors on this book; if you have any interest in the Middle East or want to understand how it's come to the absolute Bugger’s muddle that it is, this book is well worth reading. 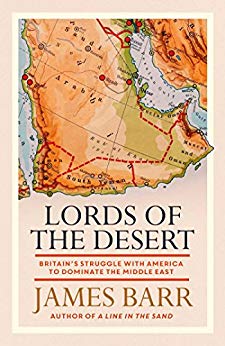