Full title... Hindenburg, Ludendorff and Hitler: Germany's Generals and the Rise of the Nazis

At the time of writing Amazon have discounted this book by 30% from £25.84 down to £18.29 which I think makes this book incredible value.

My history education at school covered WW1, mainly in Europe, yet I had never heard of Ludendorff. This is yet another book that has added a few nuggets of knowledge to my education, and possibly one that has also helped me understand a little more of how Hitler came to power.

The author has written several books on history and the dust jacket 'blurb' claims that he is an expert on Europe in the interwar period. To be honest, compared to my knowledge of the interwar period almost anyone is going to appear to be an expert, but to quote my old history teacher, this guy does seem to ‘know his onions!’

The book is well laid out and very easy to read and early on has a very useful map of how the Weimar Republic was composed, which was great because I had very little idea. There is (as expected from a serious academic work) an extensive notes section and what I see as a quite strong bibliography, both of which I take as indicative that someone has really done their research, hence I see this as a credible book.

There are plenty of high-quality plates in the book, and I think I have only seen a couple of them before. The plates are well annotated but are grouped in the centre of the book. This is a favourite gripe of mine as they’d be so much more useful if they were sited appropriately in the text. I know this is done for production ease and economy, but I’d settle for lower quality images if this was done. On the plus side, that really is the only gripe that I have about this book.

The text is contained in 5 logical and chronological chapters plus a prologue and epilogue. I found chapter one the most interesting as it revealed a theme that was going to continue throughout the book; lies, misdirection and falsehoods. Something that is still prevalent in society today.

Hindsight is a wonderful thing, and these days we are able to research and verify things almost instantly, but to see how the German people were misled and how they swallowed the ‘facts’ that they were fed is an eye opener. Did they really believe the story that the mighty German war machine was defeated in WW1 by traitorous politicians and lefties, not to mention jews, that was vociferously pushed by Ludendorff? – The great ‘stab in the back’ myth?

Was Hindenburg suffering senile decay when he appointed Hitler as Chancellor as many seem to believe, or was he fully aware of what he was doing? I guess the historians are going to argue for a long time yet, though the author of this book thinks he was not suffering senility.

A well-considered book that had me stopping and thinking every few pages and researching on the internet; I’m going to run to 4.5 anchors. This book really added to my awareness of the events that led to Hitler and the Nazis’ rise to power, but has left me with plenty more questions. 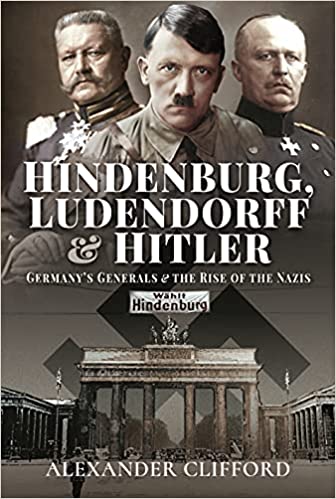