I’ve resisted writing this review for over a week as I’ve tried to collect my thoughts on the book and make sense of things. Truthfully, I’m still very torn, even though I enjoyed it and learned a few things.

I spent time working on Hawker Hunters during the 70s and was amongst the first employees of the successor company (BAe) to be issued with a certificate of completion of an apprenticeship. That puts me on a par age and experience wise with the author. Where the author beats me is that he has access to the BAe archives and doesn’t need to rely on memory or former employees’ memories.

I think the biggest source of my confusion/dissatisfaction is that the title of the book is a little misleading. This book is about very much more than the story of Hawker and the Hunter, especially the later chapters. Whilst recognising that the story of how the Hunter came into being is a lot more than just about Hawker the company, I feel that the author didn’t lay down adequate boundaries before commencing writing. This has allowed project creep to occur and to a certain extent a dilution of the story.

As I’ve found before, the publisher (Pen and Sword) leaves a lot to be desired when it comes to proofreading and correcting basic errors. It was noticeable that grammatical errors increased towards the end of the book, possibly implying that the editor/proofreader became bored and got sloppy. One of my biggest gripes is that the author is inconsistent in his referral to official bodies. For example, sometimes the author would refer to The Ministry of Supply, other times the MoS and on yet other occasions as simply The Ministry. A decent editor/proofreader would have sorted this out.

However, coming from the aviation industry I could at least make sense of things, as I could with the wide array of acronyms and other abbreviations that the author has used. I’m not sure others could do this or would be bothered to; and therein lies a big problem. Many simply wouldn’t have persevered with the book as I did.

Moans and groans over (for a minute) what I really did like about the book was the abundance of pictures and the fact that they were inserted along with the text that they related to. There are also some great Hawker General Arrangement drawings reproduced, many that I wasn’t aware even existed.

But unfortunately, at least one picture is captioned wrong. This isn’t necessarily the author’s fault as the picture (and caption) came from the BAe archives, but it does show how careful authors need to be and how they need to double-check everything. – I did ask a few of my former co-workers to verify that I was correct on what I had spotted, to a man they agreed; unfortunately, that does cast a sight shadow over the rest of the research and content.

I personally hold the Hunter in great esteem, my first memories of seeing it being flown over East Anglia in the 60s experimenting with the speed of sound. I can still vividly remember the sonic booms. Later, when working on the aircraft I was impressed with how solid and well-engineered everything felt, and this comes through from the text; the aircraft was extensively tested, improved and engineered as it went through the various stages of development/evolution.

I found that the book brought back many memories for me, most of them happy ones. The author wrote about problems with undercarriages not deploying properly; I had one collapse as an aircraft was lowered from jacks in the 70s. That was a touch embarrassing as the site manager was watching.

After much contemplation, I’m going to run to 3.5 anchors on the book. I feel a trifle guilty, not to mention mean about this, and it really is a shame because with a little bit more thought this book could be so much better, and the story, which really is fascinating and worth telling, could be made to appeal to a much wider audience. 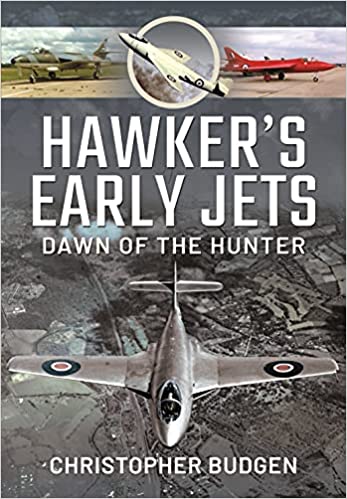