A great little read that offers lots of advice to the budding restorer who has a little mechanical aptitude and a decent tool kit. However, as a look back in time to how things used to be, this book is the proverbial goldmine.

The book is old now, published back to 2004 but with parts dating back much further. There’s nothing wrong with this, but the book would benefit from updating for it’s intended purpose. Insurance groupings have changed as a simple example, and many contact details are now incorrect. Of course, with the internet it’s quite easy to carry out verification of details, but it does detract a little from the book’s primary intention.

The first chapter is a comprehensive history of the Capri models and the markets they were sold in. This in itself is interesting from a historic motoring perspective, but if you want a particular model of Capri for restoration this provides hints as to where you might find it. Thankfully, the UK had a good range of Capris, so finding what you want might not be too difficult.

The manual contains many photographs, but generally they are of poor quality when compared to the high resolution digital photography that we are used to today. However, it is these photographs that add a completely unexpected dimension to this book: it’s a social history of the UK car repair scene toward the end of the last century. Hands are ungloved and covered in oil, plenty of the tools shown are now obsolete, many techniques are now seen as antiquated, but my favourite was spotting a bottle of Jenolite rust converter sitting on a table. This must surely have been one of the first outings of Jenolite in a car manual?

The book brought back many long forgotten memories of myown involvement with Capris. A friend and I bracket raced one at the local racetracks at the weekends. We’d drive it there (and hopefully back): we’d lightened it by removing everything we could. The trim section of the manual brought back memories of broken clips and bits falling into body cavities where irretrievable, they rattled forever.

A picture of the Tickford Capri brought back memories of ‘testing’ one on MIRA’s high speed test track in the early 80s. Whilst I wasn’t employed as a driver, I did manage to get my hands on a vehicle and have a blast on the proving ground with it. Even now I can remember how quick it was. It also brought back memories of a neighbour’s Comanche Capri: now that’s a rare beast.

As I started reading this book, Bernie Scripps, the garage owner in Heartbeat (UK TV series) commented to someone that the Capri was “all style over substance”. I think is a fair point from the early days, but things did develop later and the Capri became a real motoring force to be reckoned with, inviting many imitators over the years.

With current prices for a Mk1 Capri requiring restoration starting below £1,000 and fully restored models asking over £15,000, perhaps this manual offers the opportunity to turn a hobby into a profit?

I’m going to run to 4 anchors for this book. The restoration advice given was sound, but the memories it invoked from my younger motoring days, were priceless. 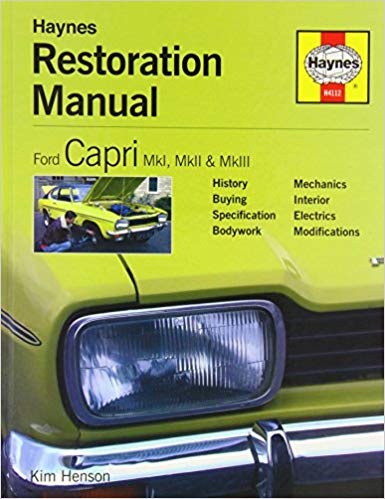