Fighting the War on Terror: Global Counter-Terrorist Units and their Actions - Judith Grohmann

Fighting the War on Terror: Global Counter-Terrorist Units and their Actions - Judith Grohmann

I’m going to start this review with a direct quote from another reviewer. “Painful to try to finish, so I didn’t. It’s like a book that badly summarizes Wikipedia pages.” I think that is a tad harsh, but it’s not far from the truth. The book is rather a let down, but unlike that reviewer, I did read every last page of it.

Reading the book details on the dust cover, “...interviews with the men and women concerned explain what their work really involves, their most dangerous missions, and the physical and mental training required for them to perform these high-risk operations, which fall outside the abilities of regular police officers. A truly intimate insight into a closed world...” There is precious little interviewing going on in the volume that I read! If it wasn’t for the few pages in the Epilogue I don’t think there was anything particularly original in the book that I either didn’t know or couldn’t have read about on the internet. Being completely honest, I find it rather surprising that Pen and Sword have published this book in its current form as other books I’ve had from them haven’t been too bad.

OK, the book doesn’t live up to its promise, but that doesn’t mean that I didn’t enjoy reading it. It’s an easy enough read, with a few awkward expressions due to it not being written in English in the first place. (The author is Austrian I believe.) Reading it brought back memories of long forgotten kidnappings and acts of terrorism and it did make a reasonable night-time read: it just didn’t live up to its promise of something new, and certainly no in depth interviews with those at the sharp end.

I’m afraid I can only run to 11/2 anchors on this one, it really wasn’t very good, but was worth a read if you want a very basic single point of reference for major acts of terrorism over the last half century. 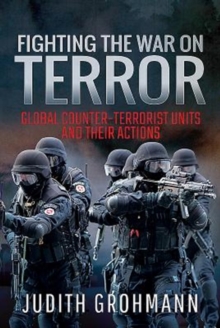