The author appears to be predominantly an academic, and this is his first foray into ‘picture’ books. Of note is that this book only covers the years 1937 to 1941. A second volume covers the years 1942 to 1945. As both books are relatively ‘thin’ volumes, I feel that it might have been better to combine them into one volume.

It took me over 3 weeks to get through this very slim (110 pages) book. Whilst most of the pages contain photographs, there are a few pages offering explanations and the odd interesting little snippet of data.

The photographs aren’t of the highest quality, but when you consider the era and that they were probably taken by amateurs, that’s hardly surprising. I’m generally a fan of photographs in books as you can learn so much by studying them. Many of the pictures in this book were very atmospheric and enlightening. I think I’d only seen a couple of the photographs before, so the author’s claim that they are rare is likely valid.

Whilst the text in the book isn’t voluminous, I did learn the odd interesting thing from it. The numbers of casualties during the conquering of Crete (4000 dead, from a force of 8000 paratroops, plus many more injured) staggered me. I was also unaware that this massacre was largely down to the Allied forces (illegally) involving the local civilian population.

So the fact that I couldn’t really relate to this book came as rather a surprise, and one that I’m completely at a loss to explain. The topic of the book ought to have interested me, as had the photographs contained in it: but sadly, they didn’t. I really found myself struggling to read this book. In truth, I even watched an episode of Coronation Street (oh the shame!) rather than pick up the book for a read. I am at a total loss to explain why.

Because of my failure to understand the reasons behind my feelings toward this book, I’m loathe to be overly (and possibly unfairly) critical. I’m going to recognise that this is a specialist book for a very narrow and highly defined market and hold it up to three anchors. 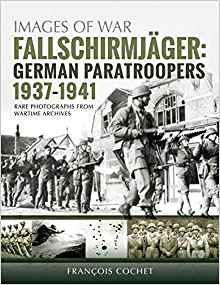