Beyond: The Astonishing Story of the First Human to Leave Our Planet and Journey into Space

At the time of writing, this book had nothing below 3 stars on Amazon, and only 8% were at that level.

This book reads like a cold-war thriller, something that John Le Carré or Tom Clancy would rightly be proud of. It upholds the old adage that truth is often so much stranger than fiction.

I grew up watching the space race with my friends, playing at spacemen and even having our own ‘capsule’ in my dad’s shed. But to be honest, since then I’ve largely put it to the back of my mind.

From the very first few pages, I was thrown with things I’d never pondered about. What was the measuring system in the USSR? Gagarin had a previous life other than being a cosmonaut? In fact, what is the difference between a cosmonaut and an astronaut? Maybe had I been a little older at the time I’d have pondered such things but now at pensionable age, it seems very odd to be asking myself such questions. I somehow feel I’ve rather missed the boat. 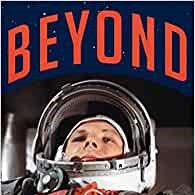 The gambles taken to put Gagarin into orbit are almost unbelievable in this day and age. It was known that the braking engine was unreliable and if it failed the flight would be extended and end in certain death for the cosmonaut, but not for the most obvious of reasons. Allied to the problems with the braking engine, the air regeneration system was rather suspect too. After test flights, puddles had been found on the floor of the capsule, which meant that the air wasn’t being dried properly. Should this happen with a cosmonaut on board, normal bodily excretions would cause problems and those normally unnoticed trivial amounts of sweat could form floating puddles in the air. These puddles could float where ever, possibly causing problems (short-circuits etc.) with the electrical systems. Incidentally, most of the systems were automatic and the cosmonaut had very little by way of manual over-ride, so problems in this area were a little serious, to put it mildly. But the most serious problem was that if re-entry timing was lost for whatever reason, it would take 10 days until natural gravity brought the rocket back into the earth’s atmosphere (a successful orbit was only planned to be around 100 minutes). Long before then, the onboard air would be so full of moisture from the cosmonaut that he’d not be able to breathe. In fact, he'd drown in his own bodily fluids.

As we all know, Gagarin did return to mother earth and alive; we’ve seen the pictures and read the press reports. What I didn’t know, until I read this book, was that the braking engine did have a malfunction and that Gagarin returned to earth separate from his capsule! The resulting cover-up and fake reports are truly works of art.

I found it very difficult to put this book down, but better still, it was an easy flowing natural read and clearly referenced.

An excellent book that came from taking potluck on the selections: thanks Andy. My good run continues and I’ll run to 41/2 anchors on this one, if you have any interest in the history of the space race, it really is worth reading.