The second in the latest series from Fabbri where. in the period following the death of Alexander the Great, his empire is splitting up, arguments starting between his acolytes all vying for the top job, or at least a good area to rule. People who were once great friends, comrades in arms and part of Alexander’s inner circle are now at each others’ throats in the struggle for power. On top of this is Alexander’s mother who is vicious and hungry for power. This book takes off from where the first ended (reviewed here https://www.arrse.co.uk/community/reviews/alexander’s-legacy-to-the-strongest.1351/ ).

The Three Paradises is the location for a conference between the senior members of Alexander’s retinue where they would discuss who had power and where that would be distributed. Also, and very importantly, who would be Regent to the two children of Alexander who were just toddlers. The Regent would have huge powers. Not everyone turns up for the conference, so matters degrade into squabbles.

The book is quite confusing at first as the author introduces nearly 100 characters, listed at the back of the book, and keeping track of who was supporting whom, when they changed allegiances and to whom along with who is killed in battle makes this a book which one is required to keep one’s wits about them. This is not helped by the fact that two of the characters, on opposing sides, have the same name! These first two books are obviously the lead up to the series, I hope whereby the winners will become apparent and the story becoming a bit less fractured between so many characters. 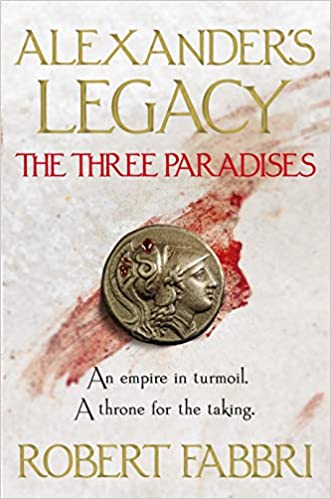 Pacts are made, promises given, letters of support are constantly being sent, changed, betrayed and former friends and allies are fighting each other, both on land and at sea. Life then was ridiculously cheap and the idiom ‘Winner Takes All’ is how they live - and die.

Fabbri is bringing a fascinating period to life, as he did with the Vespasian series, and I am sure that as the characters settle down into the main protagonists then the books themselves will calm down. This is a novel, but it describes the disintegration of Alexander’s empire so quickly after his death extremely well. Decisions are made and alliances forged which change the lives of those that make them. Some work, many don’t. Some people are happy to have power in relatively small areas, basically modern country size – but some others wish total power over an Empire as Alexander had. The desire for this absolute power eats away at people, setting family against family with plenty of blood, gore and pain to satisfy the most ardent ancient warfare reader.

This is a cracking book which, once the reader has got the characters sorted in their mind, runs along at a furious pace leaving this reader waiting for the third in the series, where I suspect the main protagonists will emerge as the story.

4 out of 5 Mr MRHs for another superb book from Robert Fabbri bringing ancient times to life.