Log in Register
What's new
You are using an out of date browser. It may not display this or other websites correctly.
You should upgrade or use an alternative browser.
Resource icon

A Treachery Of Spies – Manda Scott

A Treachery Of Spies – Manda Scott

Without doubt the best thriller I’ve read in a long time. I found this book very reminiscent of le Carré’s “Smiley’s people” or his “Tinker Tailor Soldier Spy” stories: and that can’t be bad

The story is very fast paced, but is skilfully plotted with very little being as it first appears. Unlike many thrillers I’ve read, I hadn’t worked out quite what had happened and who was responsible until the author chose to reveal all at the very end: and a very good ending it was too. I suspect that there may well be a follow on book to this at some stage in the future.

In a nutshell, the story is about WW2 French resistance fighters being betrayed and that betrayal living on through those affected until the present day; where old scores are being ruthlessly settled. The author weaves two story lines (past and present) together in a format that at first confused me, but once I’d gotten the hang of it, it was easy to follow.

The present day story is set in Orleans, France, and not New Orleans USA as I managed to originally misunderstand! Once I had cleared that little mistake up a lot of things became much clearer. – I can only blame the good quality single malt I’ve been drinking recently, likely in far too great quantities.

The past story is set around the D Day landings, but the story is not about D Day itself, rather what the resistance were doing to cause mischief elsewhere in order to tie up the occupying forces. It thus involves SOE and the assistance (or otherwise) that they gave the French resistance. - Cross and double cross.

I would guess that the central character Picaut, a female French police officer, has likely appeared in earlier books by this author as references are made that are outside the scope of this work. It’s fair to say though that although this doesn’t unduly affect the story line, it is a little bit of a needless distraction wondering about her past. Another slight niggle I have is the large cast of players. Whilst I understand the necessity, it did become a tad confusing at times.

The story is (allegedly) fictional, but fits in so tightly with actual history that at times you find yourself questioning if it really is fiction. Credit for this realism is down to the author’s diligent and extensive research of those troubled times, and she kindly gives us a partial bibliography at the end if we want to follow up on any aspects that are in the story. When was the last time you saw a bibliography in a work of fiction?

I really can’t fault this book. It kept me in enjoyable bedtime reading over a couple of weeks. 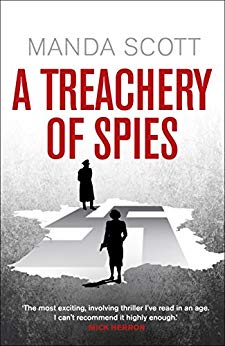